Queen of Gold
Enjoyed playing this game?
Rate it → 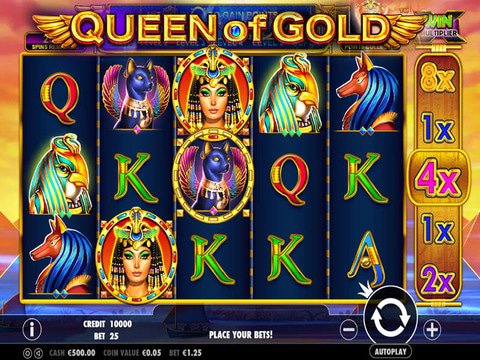 With a devout collection of followers to the Queen of the Nile, Cleopatra even long after she is already gone, it is apparent that she's one of the most influential figures in all of History of Egypt. With Sot games being greatly devoted into portraying Historical views on top of the reels, Cleopatra has frequently been used already for various slot games, one that you should play and check out is the Queen of Gold Slot Machine from Pragmatic Play. In this game, Pragmatic Play proves that it is one of the forerunners of the industry by providing one of the most enthralling and visually compelling take on the Queen of the Nile. If you're ready to set foot on an adventure that even got Canadian gamblers bewildered from it, then start off through the Queen of Gold free play slot demo so you could learn more about the game with no risk, no download and no registration needed.

The Breathtaking Queen of Nile

Who could be better than the Queen of Nile to portray riches and glory at its finest, right? In the game, you'll be taken back to the past all in a crisp, compelling and incredibly robust and solid graphics whether it be the background of the game, its reels or symbols. It is simply an understatement to call it beautiful as the reels portray High-definition graphics which is something hard to live up to for other games in the same category. There are card icons in the game, but the most breathtaking ones are definitely the various pictures of influential figures from Bastet, Anubis, Horus and of course, Cleopatra. This enigmatic queen is pictured as a riveting, bewitching and yet very enigmatic character topped with 200 coins for the jackpot. Other symbols on the game are lower than what Cleopatra offers, but there are also special features like the Sarcophagus Wild symbol to help you in completing winning combinations or the blue pyramid bonus symbol that could award you with free spins. Unfortunately, the good things stop there and there's no doubt that many would want to have more features or even higher prizes to make the game more lucrative than it is now.

With Cleopatra's popularity, it has long been integrated into the slot scene already and aside from Queen of Gold Slot Machine, there's also Cleopatra's Treasure Slots from iSoftbet. It comes with a simple 5-reel and 5-payline matrix with crisp and robust graphics that are made to provide a historical aura to the game. It makes use of various symbols from scatters that could give you up to 100x multipliers, free spins, wild symbols and a whole lot more to look forward to.

Seeing as the Queen of Gold Slot Machine is not the most lucrative game there is despite its breathtaking graphics, it is of utmost importance for players to make sure that they utilise every advantage they could get to win. We implore players to take the journey to Egypt via the Slots Million Casino. Staying true to its reputation, this game is a haven for slots and this is made apparent with their offers. Aside from a whopping 100% match-up that'll double up to $100 of your first deposit, it also has 100 free spins bonus, reload bonuses and VIP and Loyal Programs.