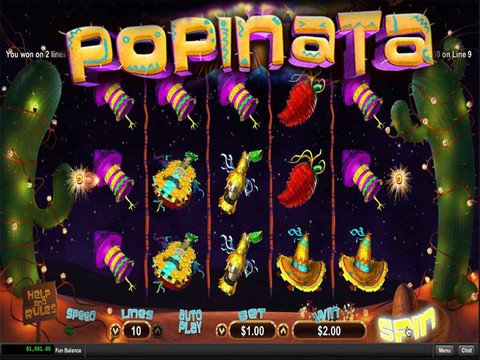 Jump into the festivities of Mexico and feel the excitement as you take part on this one-of-a-kind street party experience through your online and mobile platforms. Enjoy all night music and indulge on different food plates in this new slot installment from RTG software. Start spinning the reels and win different rewards and bonuses in Popinata slot machine. Target the special piñatas and land these on the screen for bigger payouts in this free play slot game which is now available here with no download requirement.

Popinata slot machine has five reels and 10 unique paylines for its players to wager on. You can place wagers for as low as 0.01 coins up to 5 credits. This allows you play with an active payline of a maximum stake played worth 100 credits per payline.

To win on the reels, you need to land the featured in-game characters on the screen which will reward you with their respective payouts. These include reel symbols like the classic Mexican sombreros, delicious tacos, sensational fireworks, hot chilis, a lot of candies, and the playful piñatas. Complete lines of these symbols to get winnings for as much as 250 times of your total stake.

But what sets Popinata slot machine apart from other online slot games is the manner it rewards its payouts. Winnings can be rewarded on combinations completed in either the left to right, or right to left formats. This increases your chances on getting more payouts during the course of the game.

Popinata also has a progressive jackpot which increases as you play on. It is recommended to continue playing on the reels for better chances of winning large amount of payouts.

The donkey character plays a vital role on the reels. It acts as the game's wild symbol which appears only on the second, third, and fourth reels. Every time it appears on the screen, it covers up the whole reel it lands on. It replaces any character on the game screen to complete winning lines.

Aside from the replacement, it also triggers a wild re-spin feature. This bonus re-spin feature is only activated when one or more donkey characters expand through the reels it landed on. The reels will spin again, leaving the covered reels intact, during this bonus round.

These re-spins will continue when additional donkey characters appear on the screen during the said bonus feature.

Other Mexican Piñata Based Games

If you can't get enough of the hype in Mexican parties, then you must also try Leander's Mad Pinatas slot machine. Mad Pinatas has five reels and 25 paylines for its players. You can place wagers as low as 0.01 up to 250 credits and win as much as $100,000 worth of jackpot. There are also several bonus rounds which may reward you with more winnings and free spin bonuses.

You may now try Popinata's demo version gameplay in Bodog Casino with no registration required. All players from Canada can also play with real money wagers to get free spins and no deposit bonuses from this site.