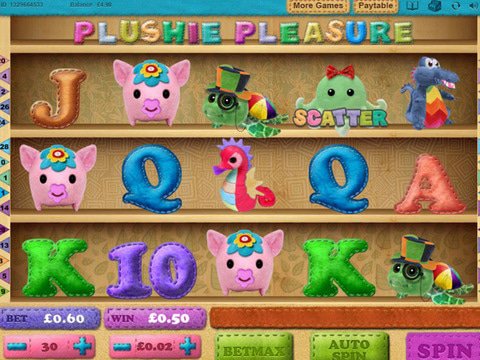 Games that enter the halls of fame of the slots industry nowadays are more often than not, those with completely intense, complex and mind-blowing background story, whopping graphics and staggering prizes all in fast-paced setups that some may be hardly able to keep up with. This kind of environment is not such a bad thing especially with huge rewards at the table, but that's only until you realize that enough is enough for a certain amount of time. If you want to take a fresh breath from the intense competition of hardcore games in the industry, Cozy Games has just the right game for you in the form of the Plushie Pleasure Slot Machine. This game will help you plunge in mountains of felt, ultra-soft animal plush toys that makes it seem like it was made for children. This is part of its beauty and you can check more of it through the no download and no registration Plushie Pleasure free play slot demo.

The Softest Paradise of Stuff Toys

Nothing could be more relaxing than a bed chock-full of stuff toys and that's something that the Plushie Pleasure Slot Machine could definitely offer you with. Cozy Games proves itself further as an up-and-coming company in the industry after arduous years in the market with its recent additions to its library of games. This game in particular comes not with the most lucrative setup, but it does offer some nice payouts in an environment that can be very relaxing and less tolling than other complex games nowadays. It will take you to a shelf-like setup, overseeing a plethora of stuff toys in different shapes all packed in a 5-reel and 30-payline gameplay that you'll be captivated to. The game's betting range is not that wide as it can only accommodate up to 15 coins per spin, but that's enough to give you a stand to win up to 10000 coins in jackpot. Inside the boxes of pleasures come card icons, pig, seahorse, whale, turtle and a crocodile stuff toys. More special stuff toys include the green octopus and the lion. The lion is the wilds of the game with highest 10000-coin payout and ability to be substituted with other symbols except scatters. The scatter is the octopus and this gracious animal stuff toy has up to 20 free spins in store for truly lucky players.

It's definitely hard to find other games centered on such a soft haven filled with stuff toys, but if you want one that's filled with animals like the Plushie Pleasure Slot Machine that's also as amiable as it is, the Farm Adventures Slots from World Match is all you need. Its artwork packed up in its 5-reel and 20-payline gameplay appears in the simplest manner, showcasing a beauty that's derived from children-like drawings. The farm portrays a very serene environment in this case but without failing to provide a marvelous jackpot prize of $7500.

Though a breather amidst the chaotic sum of games in the industry, you should always aim for the win even on Plushie Pleasure Slot Machine and you can increase the odds of that by playing it at Lucky Admiral Casino. Here, you could revel on £500 dollar-for-dollar bonus, a generous £10 no deposits bonus, vouchers and monthly tournaments.