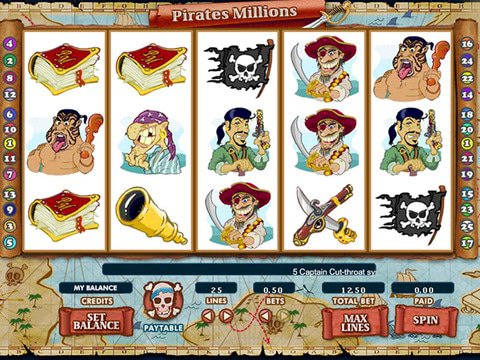 Upon one's entry into the gambling world, there's no doubt that you'll be able to realize immediately that one of them most used genre in the industry are about pirates. This treasure-seeking genre paired up with the concept of waging provides one of the greatest combinations in the industry which makes it no wonder why many games land under the wings of this genre. The Pirates' Million Slot Machine from 888 Holdings is one of the games that's evidently under the exhilarating and invigorating genre of Pirates. Still, it sets itself apart from others with its unique and unexpected twist that will surely keep you intrigued and entertained with the game. Care to find out it secrets? Indulge yourself in this spectacular experience and review the game with no risks and strings attached through the no registration and no download Pirates' Millions free play slot demo.

Avast Ye and Conquer the Oceans

As an aspiring Captain, one would expect certain dangers across travels on the vast sea. Apparently, the starting point of the game occurs as the Pirate Crew already experienced a catastrophic twist of events, eventually leading to only the Captain of the ship to survive. The captain could be seen at the right side of the screen with a gleeful smile whilst on top of a beat-down and flimsy boat made of bamboo that could even be hardly called a boat. Still, it is apparent from the 3D graphics that the game was made with extreme attention-to-detail and outstanding effort, providing an astounding experience just about for anyone who sees it. The game comes with a 5-reel and 15-payline matrix, but with a non-customizable structure. You could only change the amount of bets you make and if that doesn't bother you then you'll be able to enjoy the game further. The game possesses lots of symbols from telescopes, compass, cannon, pistol and more, with the compass having a jackpot of 1500 coins. There are also three special icons on the game that's worth noting which includes the Pirate Scatter symbol, the Pelican Wild icon and the Treasure Chest Bonus Icon. Not to mention, on top of these lucrative features come a Progressive Jackpot that any player and aspiring pirates would surely crave for.

If you love the thrilling and blood-boiling adventure revered from Pirate-themed games like the Pirates' Million Slot Machine, then you'll surely love playing the Pirates Treasure Hunt as well. Though its graphics may not be as impeccable and innovative as the Pirates' Millions, it possesses a more intricate control system that may be to your liking. It comes with simple graphics with plethora of symbols that could help you win. This 5-reel and 20-payline game also takes pride in its jackpot prize that soars up to $50000 with bonus features and more that will surely make you unable to resist.

The most effective way of gaining the upper hand in playing the Pirates' Million Slot Machine, is to utilize every aspect you could think of which includes the site where you'll play. We highly commend players to play this game at 888 Casino, one of the most revered in the industry. It comes with towering amounts of promotions from no deposits bonus, match-up deposits and more, paired with exemplary security and other divine features.