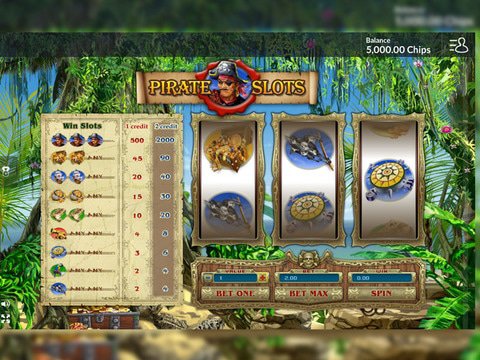 Prepare yourself for some off shore action as you venture your way off the seas to look for hidden treasure chests and valuable artifacts in this new slot installment from GamesOS software. In Pirate Slots slot machine, you get immerse yourself in the world of pirates, big ships, and treasures right in the comfort of your own home. Try to land winning combinations as you spin the reels and end up as the luckiest treasure hunter in this expedition. Start packing up and be part of this voyage in this free play slot game available here with no download required.

This classic three-reel, one payline slot machine brings fast-paced gaming to its online and mobile players. You can place wagers for as low as 0.10 credits up to 10 coins per spin. Play with the max stake available and get to win as much as 10,000 coins on the reels.

In terms of the combinations you need to complete, Pirate Slots veer away from having a set of the same symbols in one line before you get rewarded. The least paying symbols of a pirate flag, a colorful parrot, a golden compass, and a canon just needs to be paired with two any other symbols to get rewarded with 4 coins up to 8 credits. Meanwhile, the treasure map, bag of gold, pirate ship, and treasure chest icons needs to have at least two of its characters on the first two reels before you get 20, 30, 40, or 90 coins respectively.

As mentioned, you need to land either one or two of the regular reel symbols on the first two reels and paired with any character on the reels to get rewarded with their equivalent payouts.

Never forget about the captain of this rewarding voyage as he rewards you the highest possible payout worth 2,000 credits for the max stake played, and 500 credits for the least wager ones. But compared with other symbols on the reels, you need to land three of his icon in one active line to get rewarded with the whopping jackpot amount.

There are no other special symbols or bonus rounds in Pirate Slots slot machine but its easy gameplay with various payout amounts will surely get you off your seats as you win big on the reels.

Other Sea Expeditions on the Slots

If you're booked for another expedition, then you can locate more hidden pirate treasures in NetEnt's Pirate's Gold slot machine. Pirate's Gold has five reels and nine paylines set in a classic slot machine which brings you the true definition of real slot gaming. Since you're after the precious pirate's treasure, then you must have to fight your way past bonus rounds which involve sinking enemy ships and choosing the right treasure chests for rewarding multipliers.

You can now try Pirate Slots' demo version now at 888 Casino with no registration requirement. Canadian players can also participate in this site to get rewarded with no deposit and free spin bonuses.