Pimp It Up
Enjoyed playing this game?
Rate it → 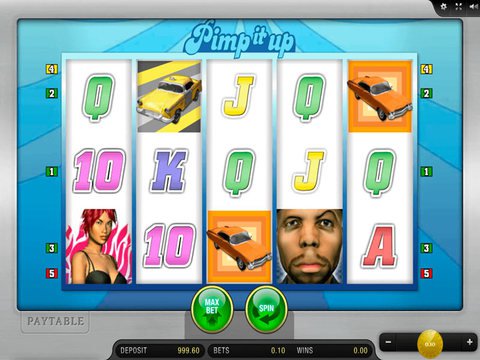 Pimp It Up Game Review

When you hear the title of the Pimp it Up Slot Machine from the renowned German up-and-coming developer, Merkur Gaming, it is easy to misinterpret its meaning. There's no doubt that majority who've heard of it will first think of gold-laden pimps wearing exquisite accessories, multiple rings, snakeskin shoes and a lavish coat and suit to boot. However, your view will surely be redefined the moment you step on its world as you'll soon realize that it's more about cars and rides, which rolled into the industry from the Pimp My Ride MTV Show. If you're a fan of the show or a car enthusiast yourself, you'll undeniably be able to relate in every spin and you'll no doubt have more fun with the game's reels. Experience the game hands-on and see if it also does great in the rewarding department through the no download Pimp it up free play slot demo which can be accessed in this page by Canadian gamblers and others alike.

The game will truly live up to its name and of course, its theme, putting varieties of vehicles in front of you that will make you reminisce about the days when Pimp my Ride was still on Television, if you have seen it back then. However, though the symbols of the game are up to point, its backdrop isn't that mesmerizing as it only comes in blue, which could have been better had it been something related to the theme as well. Still, even with that, this 5-column and 5-payline game still holds a classic prestige with intuitive controls that can let you hit the betting range up to 10 coins per spin with just a button. You can also check out the pay table to inspect what each symbol combinations could provide you with. This way, you'll know what to want to get on top of those reels. There are Ace, King, Queen, Jack and a 10 symbol which are commonly seen in cards. There are also an orange and yellow muscle car, green truck, the game's symbol, a man and two girls. Despite the game only having its low-payline reels and low betting range, the pimp it up symbol holds quite a lavish payout of about 10000 coins at max while on top of that, the game utilizes common special symbols which is the wild and the scatter. The man is the wild which can be substituted for other symbols while the two women together has the power to bring you free spins to let you enjoy more of what the game offers.

Car Run Slots from Isoftbet, just like the Pimp it up Slot Machine, is all about vehicles but, it puts a twist on it by giving it the old classic look. The game really looks like those slots which you'd see in brick and mortar casinos with a 5-reel and 5-payline matrix and a whopping $5000 jackpot to boot.

Enjoy the game at its fullest by making sure to follow our recommendation and give it a spin through Lvbet Casino. Revel on vast amount of promotions that will make you want to play even more and play worry-free with their superb security and topnotch customer service.