Phoenix and Dragon
Enjoyed playing this game?
Rate it → 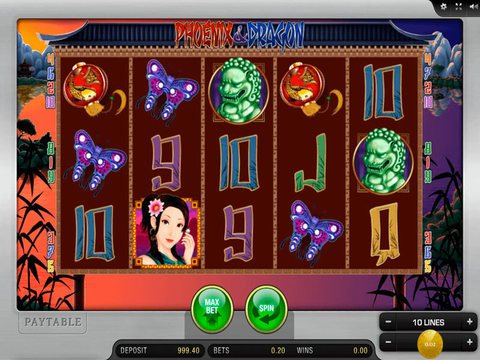 For generations, one mythical creature after another has been derived from different corners of the world but, without a doubt, the Orient has one of the most astonishing set of mythological creatures that have expanded across the globe. Two of the Primal creatures ever known in legends are Dragons and Phoenixes and in the Phoenix and Dragon slot machine from Merkur Gaming, you'll finally be able to know what will be the result if two of these divine creatures meet head-on. The Fire-breathing, majestically scaled Dragons and the Nirvana Flames of Phoenixes are a point of terror and splendor for many and in this game, you'll further be awed by them with the rewarding reels you'll encounter. Learn more about what this mythical game has to offer by getting to experience it yourself with the no download and no registration Phoenix and Dragon free play slot demo.

A Divine Battle Between Legends

With Orient being the origin of this two divine, mythical creatures, it is only right for Merkur Gaming to have incorporated a backdrop that will showcase the beauty of the Orient. You'll see variety of islands, temples, mountains and bamboo shoots in the game, giving off the majestic appeal of the game. The reels is enclosed within a robust temple, which holds the diverse set of symbols of the game which comes in a 5-colum and 10-payline reel setup that's customizable through the controls of the game. The game unfortunately, doesn't excel that much in sheer rewarding power as the beautiful orient woman only comes with a 2500 payout, which is the highest in the game. Other symbols in the game includes card icons, jade statue, a koi carp symbol and a butterfly. It also makes an astronomical comeback with the game's phoenix wild and the dragon wild. Both of them also play the scatter for free games, which when triggered, will activate two different scenarios. The Phoenix will trigger a type of spin where extra wilds will be placed on the 1st and 4th reel while the Dragon Spin will welcome you to a whopping free spin round with the 3rd to the 5th reels having Blue Wilds to boost your winning chances exponentially. If you think that the reward isn't enough to satiate your hunger for risks, engage on the gamble feature of the game which comes in two types but will boil down to the fact that you'll stand a chance to double your winning spin or lose it.

The slot industry will never run out of mythical creature games to play with and the Dragon's Deep is one example of that. It's a Novomatic game with a 5-reel and 25-payline setup topped with Viking environment that's unique to Dragon Games. It has a wide array of betting range and powerful rewards to keep you interested.

Make sure that you'll be spinning Phoenix and Dragon Slot Machine at Lvbet Casino to reassure yourself that you're getting nothing short of what you need to amplify your winning chances. In the site, you'll be able to revel on other software and games, while also standing a chance to win more with their vast promotions from match-up deposits, reloads and free spins bonuses and a staggering LV Wheel Feature with varieties of Levels to exploit.