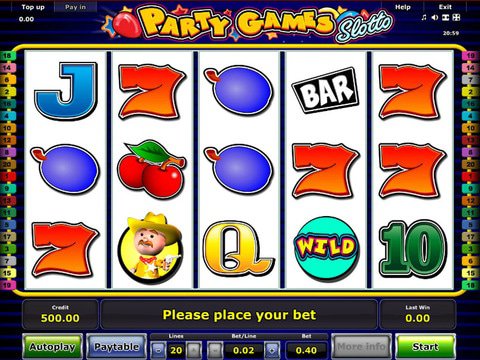 Crash a party by playing the Party Games Slotto slot machine. This 5-reel game has a touch of the classic fruity slot machine. You can take a peek on what's in store for you through the free demo game on this page. No download is needed to try the game.

There are lots of gaming machine that use fruits as its theme. However, the Party Game Slotto tries to surpass the others by including plenty of features. Its user interface is quite simple, as the background of the reels is just plain white. The usual symbols you will find from the vintage fruit machine are also present in this game. You will encounter some plums, cherries, watermelon, bar, and number seven. Despite having a modest design, the game still showcases a little animation whenever you hit a winning combination. The fruits and other icons seem to party.

Party Games Slotto slot machine is developed by the Novomatic software. Standard options such as the Autoplay feature is added in this game. It is possible to party hard with just a minimal effort by using the Autoplay button to automate your spins. You can set the number of automated spins you want up to 50 times.

During the game, you can activate up to 20 pay lines of Party Games Slotto. To enter the party, you need to bet at least 0.02 per line. Allowed stake can go as high as 5 coins per line, giving you a chance to bet as much as 100 coins per spin. Your bet can be configured using the buttons at the bottom of the reels. The number of active betting lines and your chosen amount of bet are also displayed at the bottom.

You can attend the party of this game using your desktops, laptops, or mobile gadgets. The quality of the game is maintained even when you are using Android phones, tablets, iPads, and iPhones.

Aside from matching the common fruits found on the slot machine, you will also be joined by a sheriff on this game. This guy controls the crowd of the party and he serves as the scatter symbol at the same time. When he appears on the third, fourth, and fifth reels, a Pick-em Bonus will be triggered. It will let you choose a character with a corresponding prize.

There is also a wild symbol on the game that can substitute other icons. You should also watch out for the number seven because if you fill all the reels with this number, you will earn the jackpot prize of up to 25,000 coins.

Another Party to Attend

You can also check out the Play N Go's Spin Party slot machine. It has the same fruity theme, but lower number of pay lines compared with Party Games Slotto.

Canadian players can check out the Cashpot Casino for a free play slot. You can also use this site to play with real money on the Party Games Slotto slot machine.