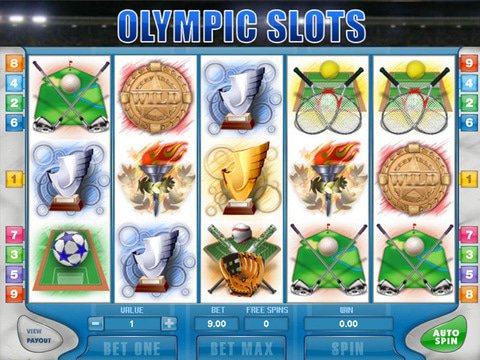 Experience the excitement of watching your favorite Olympic Games right in the comforts of your own gaming platforms while you try your luck in this new slot installment from GamesOS software. In Olympic Slots, you get to play classic Olympic Games like basketball, hockey, soccer, and many other sports in an open stadium where cheerers motivate you to win big on the reels. Compete your way to achieve the Bronze cup reward for extra bonuses and rewards. Let's get physical and participate on the games in this free play slot available here with no download required.

This five-reel slot has nine paylines for its online and mobile players. You can wager for as low as 0.50 coins up to 10 credits per line which allows you to play with 90 credits per spin.

The highest paying symbol belongs to the bronze trophy which grants you 1,000 credits of your total wager.

There is also the wild medal symbol which replaces any character on the reels - except for the scatter and bonus symbols - to complete a winning line. Though, it doesn't reward you with any payout equivalent or bonus prizes.

There are also other trophies which you can collect and brag on the reels. The silver gaming trophy acts as the scatter symbol which rewards you with bonus free spins. You can win as much as 30 free spins when you land five of this symbol anywhere on the reels. Land four trophies and get rewarded with three bonus spins.

You should also aim for the golden trophy which represents the bonus symbol on the reels. When three or more of this appear on one active line, then you get to trigger the special feature from Olympic Slots slot machine. The bonus game tests your skills on fishing as you are transported into a pond where you get to choose your fishing spot, rod, bait, and many more. Each choice rewards you with multipliers or cash rewards. You can accumulate more winnings during this bonus feature until the round is over.

Other Sporting Events to Join

If you're truly an Olympian and want to try more games from this prestigious sporting event, then you should also try iSoftbet's The Olympic Slots slot machine. In The Olympics Slots, you also get to try other sports like badminton, table tennis, and weightlifting in its five gaming reels which have 40 paylines. Earn gold medals as you spin and you might end up as the event's big winner with 50,000 credits.

You can now continue your quest on earning more medals in Olympic Slots slot machine in its demo version gaming now available at 888 Casino with no registration required. All players from Canada are also welcomed to play with real money wagers to get free spins and no deposit bonuses.