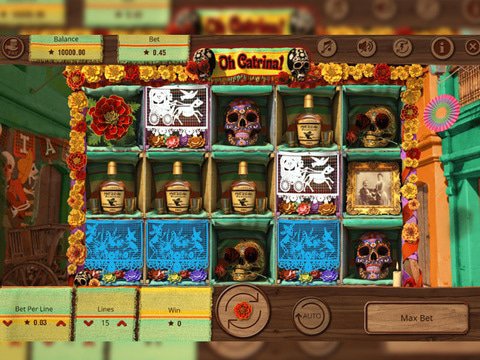 The day of the dead in other cultures, are more often than not, celebrated through gloomy and dark atmosphere. Even the famous Halloween days are spent with enactment of creepy and spine-chilling monsters but Mexicans, known for their flaring and flamboyant festivals stays true to their culture as they celebrate the "El Dia De Los Muertos". This is obvious the Mexican for "Day of the Dead" and in Booming Games Software library, they have incorporated this very festival into their slots, introducing the Oh Catrina Slot Machine. Wear your most fitting getup for such a flaring occasion as you take Catrina around the streets in this fun and exciting game. The Oh Catrina free play slot demo placed in this page will give you a heads-up of what to expect from the game without worrying about any hassle and risks since no download and no registration is needed to engage on it.

Celebrating the Day of the Dead

With the colorful buildings, flowers and designs emblazoning the streets, it is hard to find out that the place is even celebrating the day of the dead. This is especially true when you lay your eyes on the quirky star of the Oh Catrina Slot Machine, Catrina. She's standing at the side of the 5-reel and 15-payline structure of the game, wearing one of the probably most dazzling, hot and colorful dress in their Mexican dimension. She's even wearing a crown of flowers which are also placed as frames on the reels. What will convince you that it's an "El Dia De Los Muertos" festival are the symbols placed on the reels. The controls of the game are pretty simple and you can easily manipulate the betting settings, adjust the lines or adjust the betting amount up to a maximum of 45 coins per spin. Many of the symbols on the game are pretty hard to recognize at first look like the skeletons and carriage portraits as their highly detailed but completely minute. There are also whiskey, photos, different kinds of skull designs, red flower and a skull-designed candle. The skulls are higher-paying symbols of the game, while the flowers and the candle play more important roles as the scatter for free spins and wilds for substituting prowess, respectively. The Candle also holds the biggest prize of the game that skyrockets to 15000 coins, making it a symbol you'd surely be dying to land on your reels.

The Mexican Day of the Dead is rarely found on the slots, but the great news is that Oh Catrina Slot Machine isn't completely alone. There's also the Esqueleto Explosivo from Thunderkick, boasting a unique 5-reel and 17-payline gameplay which also portrays the Day of the Dead. This is obvious with the variety of skulls plunged into its reels and the Mexican Suave appearance these dead are wearing. The game comes with explosive and appealing prizes, putting it in a high pedestal even on the overall industry.

If you want to take out Catrina in the Oh Catrina Slot Machine and have some fun on the Mexican Streets, make sure you bring more juice by playing the game at Tropezia Palace Casino. The site offers a variety of bonuses from match-up deposits and VIP club bonuses to its players along with unbridled support and security.