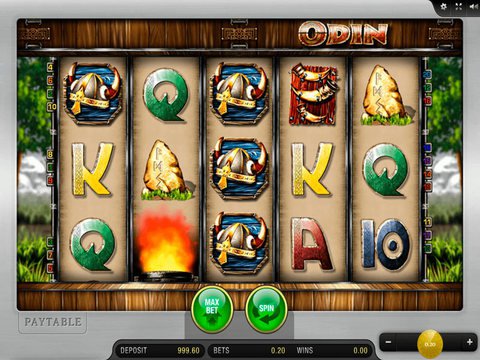 There's no doubt that those who are less knowledgeable about Norse Mythology would surely go for Greek themed slots and alike. However, if you like Thor and of course, there's a high probability that you know him - you'll surely be more than open to accommodate the game from Merkur Gaming, the Odin Slot Machine. Odin is the most powerful God in the Norse Mythology, being the father of all the Gods in his realm with the power that could surmount every other Gods. This one-eyed all-powerful God excels in various points and aspects and you'd surely have fun with him in this rewarding game. Canadian Gambler or not, you'll have an equally astounding time playing its reels but if in doubt, you can still get to know more about it through this review along with the no registration and no download Odin free play slot demo in this page.

Feel the Wrath of Odin

Although the powerful Odin with his intimidating one-eyed appearance along with his aura flocked with ominous ravens is the main character of this game, you should not fret because he wouldn't just smack you with lightning on a whim. What he will do in this game is bring you to his wonderful abode and let you revel on the divine atmosphere which it has to offer. Being in his realm, there's no doubt that you'll see other Gods and symbols that fits his world perfectly and despite some aspect not hitting the mark, everything harmoniously plays well together to bring a whopping experience to wagers. The game plays on a 5-reel and 20-payline matrix and a betting range that can only go up to 10 coins per spin. Unfortunately as well, the game may not also be that appealing when it comes to prizes as the highest payout symbol in the game only drives up to 1000 coins. What would surely make a comeback for the game is its robust symbols with exquisite detailed designs. There's Odin, a female God, Viking helmets, shields, battle axe, a stone with mark, the wild shield symbol and the Fire Scatter symbol. The fire scatter can bring you indulging free spins to boot while the battle shield wild symbol increase your chances of winning with its substituting capabilities. These two are pretty common but, what sets the game apart from other is the Wooden Wall with an auspicious sign and packed in a stacked form. It triggers re-spins and is sticky during those rounds while afterwards, it will reveal a stack of new and identical symbols that will boost your winning chance by leaps and bounds.

A Norse Mythology game like Odin Slot Machine, is the Thor: Stormlord slot from 1x2 Gaming. It features a more prominent character known by many, Thor, in a 5-reel and 25-payline game. The game is filled with beautiful symbols and backdrops along with highly rewarding symbols and features that will surely give you a pristine gaming experience.

We suggest that you play the Odin Slot Machine at Lvbet Casino to revel on what it can offer with the finest conditions. Have more spins and fun to revel on with their match-up deposits, LV wheel exclusive feature, free spins bonuses and more regularly updated promotions to rain you with diverse advantages.