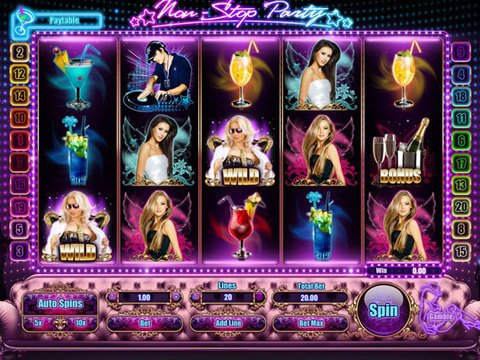 Enjoy a unique party experience while trying to win big on the reels in this new slot developed by GamesOS software. In Non-Stop Party slot machine, you get to have fun on the upbeat tracks played by the virtual DJ as you dance your way off in getting exciting rewards. Before you call the night off, have a glass of the club's precious wine and you might win special bonuses from the reels. What are you waiting for? Hype up and try this free play slot here with no download required.

This five reel slot has 20 active paylines for its online and mobile players to wager on. You can place stakes for as low as 0.20 coins up to 2 credits per line which allows you to play with 40 max credits. If you want the game to play for you, you can set the autoplay feature on wherein you get to choose how many spins will be automatically played.

Non-Stop Party slot machine features reel characters and symbols only seen during parties and inside VIP clubs. These include various cocktail drinks in different colors which pay you as much as 100 credits in one active line. The DJ playing modern hits during the party pays you with 250 coins; whilst the bulky security or bouncer rewards you with 500 credits.

You should not take away your eyes to these young and beautiful ladies gracing the event. The lady in white pays you with 1,000 credits; while the one in black grants you a whopping 2,000 coin payout. Meanwhile, the glamorous blonde woman acts as the slot's wild symbol which replaces any character on the reels - except for the scatter and bonus symbols - to complete a winning line.

Aside from these payouts, you are also rewarded with bonus free spins when you land three or more scatter symbols on the reels. The scatter is represented by the glimmering disco ball which triggers 5, 10, or 15 bonus games when you land 3, 4, or 5 scatters respectively.

Never miss a round without a glass of champagne which also represents the bonus symbol on the reels. Three or more of this symbol in a playing line activates the Magic Drinks bonus feature. During this special feature, you get to pick from the champagne bottles on the screen which has corresponding rewards beneath it. This bonus round will only end when you choose the wrong champagne bottle from the selection.

Don't stop partying on the reels with Play'N Go Spin Party slot machine. Spin Party is another all-nighter party themed slot which revolves around sexy lads dancing to the beat of the rave music played in the club as you make your spin on the reels. Although it may sound as complex as of other similar themed machines, Spin Party boasts its simple graphics and characters for easier gameplay among new and existing players. These include fruit symbols, bells, bars, and the classic sevens.

You can now continue the fun in Non-Stop Party's demo version in 888 Casino with no registration requirement. Canadian players can also join the party to get exclusive no deposit and free spin bonuses.