Nian Nian You Yu
Enjoyed playing this game?
Rate it → 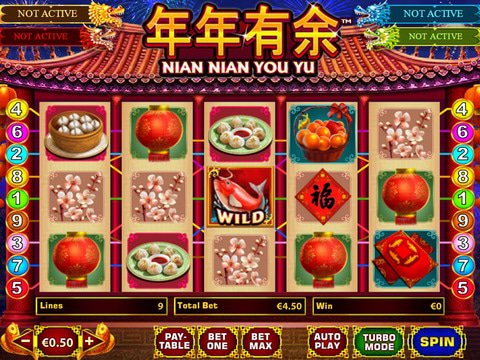 There's a lot of Orient-themed games out in the industry that you could choose from, but nothing is as celebratory and as obvious as the Nian Nian You Yu Slot Machine developed by the one and only Playtech. Its name alone brims with the vibe and atmosphere that you'll only find on Chinese-themed games and that will surely be amplified by multiple folds as soon as you enter its otherworldly universe that will undeniably surprise you. Enjoy this exquisite and unique celebratory theme and get the chance to earn big just by finding various items within the crowd of this stunning event. Banish your doubt as well before playing it for real money, by getting a hold of its ins and outs through giving it a review with the help of the Nian NIan You yu free play slot demo.

As soon as you enter the world of this game, you'll surely feel the jubilant and festive vibe it has going for players. The background of the game is laden with a lush forest reigned by a night sky, while fireworks are exploding throughout the sky. At the center of the game is the reels housed in an imperial-designed building embellished with Chinese characters referring to the title of the game. The reels themselves are as Chinese as they can be while at the bottom you'll be able to see the controls that were designed to meet the theme as well. The game has a pretty simple setup with a 5-reel and 9-payline matrix and you'll surely find it easy to manipulate the specifications of the game accordingly. In the game, you'll witness various regular symbols from a single Chinese character, flower blooms, lantern, bells, dumplings, red envelope, oranges and two different dragons. The jackpot prize you could win from the regular symbols along with the carp wild symbol and scatter symbol, could bring you up to 500,000 coins. Aside from that, the game also features a randomly given progressive dragon jackpot that could award players with an astronomical amount of money that would exceed their imagination. The betting range of the game encompasses players from low, mid and high rollers as it can go as low as €0.01 up to €450 per spin.

There's a seemingly endless supply of Orient-themed games out in the shelves today, however, only a portion of them could be considered worthy of your hard-earned money just like the Nian Nian You Yu Slot Machine. Another that has taken the industry by storm is the Geisha Wonders Slot, developed by Net Entertainment. This game plays on a 5-reel and 30-payline matrix, while boasting up to $20,000 as jackpot prize. It utilizes special symbols that could even bring you up to 30 free spins and more, making this game more than worthy for you to play.

It is always ideal for any wager to play at a site that can easily be deemed one of the best. We suggest that if you're planning to play the Nian Nian You Yu, then the Slots Heaven Casino is the best possible choice you could make. It comes with supreme free deposit bonuses, no deposit bonuses, match-up promotions along with top security and optimum customer service.