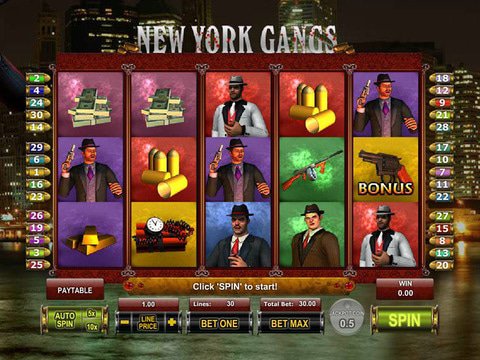 Travel back in time when gangsters rule the streets of the Big Apple in this new slot machine developed by GamesOS software. In New York Gangs slot machine, you get to experience the lavish and dominating life of mafia members in New York while spinning your way on winning big on the reels. Collect valuables like weapons, stylish attires, and briefcases which may be full of cash along your way. Enough with your good boy image and start enjoying your gangster life in this free play slot game available here with no download required.

This slot has five reels and 30 fixed paylines for its online and mobile players. You can place wagers for as low as 0.50 coins up to 4 credits per line which allows you to play as much as $150 per spin.

There are various mob-related symbols and characters on the reels which can win you as much as 3,000 credits. These include a stack of bullets, a time bomb, an automatic rifle, and bundles of cash which reward you as much as 80, 100, 120, and 150 credits respectively. Get to meet other gang members as they pay you 200, 400, or 500 coins. You should also pay the mob boss a visit as he rewards you with 1,500 credits for one complete line of his character.

The highest paying symbol is the pile of gold bars which grants you as much as 3,000 coins.

You should also watch out for the safe symbol which represents the slot's wild character. Aside from substituting any character on the reels - except for the bonus symbols - to complete a winning line, it also triggers a Mega Wild bonus feature. You just need to land this wild symbol on reels two or four to activate this special wild feature. During the Mega Wild feature, the whole screen turns into one big wild symbol which pays you instantly.

There are two bonus symbols in New York Gangs slot machine which may rack you up more winnings. These are represented by the briefcase and revolver symbols. The briefcase character activates the Odd Man Out challenge wherein you need to just shoot one of the two mob members to collect prize inside his briefcase. Meanwhile, the revolver triggers the Russian Roulette round wherein you freely pull the trigger of the revolver as many times as you can to get bonus prizes.

Each bonus feature is only triggered when three of its represented symbol appear on an active reel.

Another popular mob-based slot in the industry today is HPG's Gangster Classics slot machine. Gangster Classics is a five reel slot machine which transports you back to a classic gangster community full of guns, booze, cash, and gang bosses. Collect these symbols on the reels to win various payouts and special bonuses. You don't have to worry if policemen appear on the screen because instead of arresting you, they will reward you more as these characters play as the slot's wild symbols.

If you can't get enough of your original gang in New York, then you should now try the demo version of New York Gangs in 888 Casino with no registration requirement. Canadian players are also welcomed to participate to get exclusive free spins and no deposit bonuses.