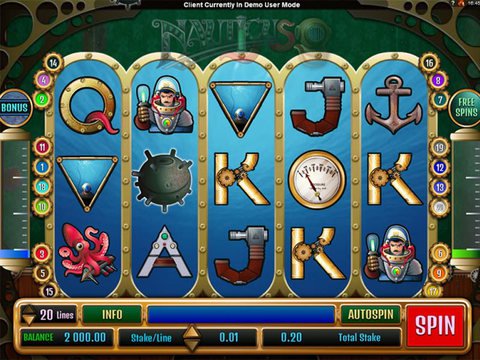 Before anything else, the Nauticus slot machine should not be confused with the maritime museum over at Norfolk, Virginia. Perhaps, the only similarity between the two is that they are both ocean-themed. However, even if you are not a fan of the ocean, you will also enjoy this game. You can play the free demo on Video Slots Casino and see if you like this game. Signing up for the Canadian gambling site will give you countless bonus offers, like the $200 welcome offer for instance. You also get a rebate every time you reload on your account, which you can do through your debit or credit card, or the e-wallet. Apart from that, you can also get access to over hundreds of titles from different developers like Gamesys, Geco, Microgaming, NetEnt, and others.

In this game, you will explore the deep blue ocean using what looks like a single-capacity submarine. You will try to find treasures as you venture into sections of the sea that nobody else has gone before.

There are five reels and three rows with 20 pay lines. You can wager for as little as $0.01 to the max cap of $10.00. You can adjust the wager per line. In the auto spin feature, you can adjust the settings to command the machine to spin for you either five times, 15 times or 25 times. But you can stop the auto spin anytime you like, or it stops on its own if you trigger the bonus round.

As for the symbols, you will see the maritime explorer with his pressure suit, some pressure gauges, a submarine's window with a tentacle from an octopus peeking through depicting the letter Q, an ocean bomb, an anchor and the letters J, A, K.

In the Nauticus slot machine, you can activate the mining bonus if you spot three or more scatters (represented by the mine symbol). Three torpedo symbols will trigger the torpedo bonus, where you will play a mini-game. You will use the torpedo to blow up the mines. Each successful hit will give you the corresponding reward. Getting three identical scatters will give you 10 free spins, while five scatters will get you as many as 60 free spins.

The Nauticus slot machine has similarities with maritime-based titles such as Lord of the Ocean or Secrets of Atlantis. The latter game is based on the mythical world of Atlantis, which was supposed to be the height of human evolution but was swallowed by the sea. A similar game is The Atlantis Queen. If you want your ocean-themed slots to be straightforward, then you can try The Angler, which is as simple as they get. The graphics are cartoonish, but the good thing is that they are 3D. In this game, you are a fisherman trying to get a big catch, literally and figuratively.