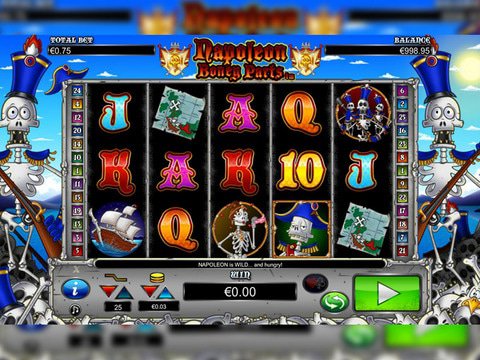 Even with the restraint of his height, Napoleon Bonaparte had undisputedly risen to the occasion during the French Revolution and became one of the most powerful leaders of the military and of the Political World. Such power, prestige and wealth is something that many gamblers would certainly love to achieve and what better way to do that other than by playing the Napoleon Boney Parts Slot Machine by NextGen Gaming . This smart and witty title is certainly far from what you'd expect as it comes with an extremely funny and enjoyable atmosphere that you wouldn't even be able to coincide with the French Revolution or any wars at that. Still, many Canadian gamblers and more have viewed the game positively and you can review it as well immediately through the help of the Napoleon Boney Parts Free play slot demo embedded on this very page. No download and no registration is required for you to proceed so you can have fun right away.

In the game, you'll be joining the renowned Military Leader and Icon in once again conquering the world. However this time, he comes back literally from the dead and as the key figure in the Napoleon Boney Parts Slot Machine. The sea is background of the game while piles of bones could be seen on the ground while skeleton soldiers can be seen on both sides of the reels. Gain riches with him as you traverse countless obstacles in the vibrant, vivid and rich graphics of the game. Focusing on the center of the game, you'll see the reels itself with the intricate and comprehensive controls organized neatly at its bottom. The game makes use of card icons, lady skeletons, ships, soldiers and maps as its symbols that could give you generous rewards. However the benefits doesn't stop there as the game comes with more astounding features that will certainly exceed your imagination. In the game, the boney emblem serves as the scatter that could award free spins with superb multipliers while the wilds of the game is Napoleon. Free spin rounds also have the feature of tripling your wins while there's a special Napoleon Extra game that will give you unique and extravagant prizes as well.

There's no doubt that you'll enjoy and feel satisfied by the rewarding and compelling nature of Napoleon Boney Parts Slot Machine. If you'd like another take on the French theme, the Moulin Rouge is certainly a great place to start with. It is widely different from Napoleon, but it's undeniably rewarding and fun in its own way. It uses a 5-reel and 15-payline matrix while offering huge jackpots to users. It's developed by SkillOnNet and with its 3D graphics, it is apparent that it can easily be included in the category of games with superb visuals.

Wars an undeniably dangerous and our site recommend users to get as much benefits as possible by playing the game at Slots Million Casinos. It comes with intuitive and great design, but what makes it more special than others is its generous line of promotions from free spins bonuses, match-up deposits and other regularly added bonuses.