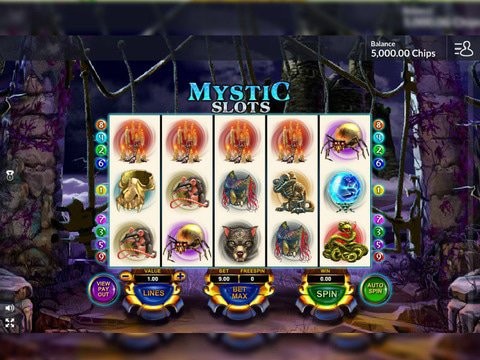 You should prepare yourself in a one-of-a-kind adventure full of weird creatures and freighting sightings on this new slot installment from GamesOS software. In Mystic Slots slot machine, you get to venture a strange forest full of wizards, witches, and other unexplainable beings as you try to land winning combinations on the reels. Experience more chill down your spine when elusive daunting creatures appear on your screen for some extra haunting, yet rewarding experience. If you're getting curious on this game, you may now try this free play slot here with no download required.

This five-reel slot has nine unique paylines for its online and mobile players to wager on. You can place stakes for as low as 0.10 coins up to 5 credits per line. Play with the highest wager possible to win the whopping jackpot worth 5,000 coins.

Mystic Slots slot machine features reel symbols based on its spooky and creepy theme. These include images of fiery candles, spiders, gargoyles, snakes, rats, and many others which pay you different payout amounts. The three highest paying characters belong to the red spell book which rewards you up to 1,500 credits; whilst the blue crystal ball grants you as much as 3,000 coins.

The strange flying bat pays you the most with a whopping 5,000 credit payout for a complete line of this character. Aside from these payouts, Mystic Slots has other special characters which bring you more rewards and bonuses.

The terrifying werewolf represents the slot's wild symbol which replaces any character on the reels - except for the scatter and bonus symbols - to complete a winning line. Compared with other wild characters, the werewolf doesn't pay you with instant rewards.

Meanwhile, the daunting mummy serves as the scatter symbol on the screen. You need to land three, four, or five of this character anywhere on the reels to get rewarded with 3, 7, or 10 free games respectively.

Lastly, the blood-sucking vampire is the bonus character in Mystic Slots slot machine. When you land three or more of this bonus character anywhere an active line, you will trigger the special bonus feature called the Shady Conquest.

During this bonus feature, you need to pass the first three levels reach the end of the chamber for the bonus payout. Choose the right statue, spirit, and ghost to get rewarded after.

If you've had enough of fears and chills in one night, then you should try Playson's Witches Cauldron slot machine for some creepy yet silly reel gaming. Witches Cauldron has nine active paylines on its five reels composed of cartoonish characters themed after the essentials of a witch and her magical spells. You'll see potions, cats, weird animals, and the witch herself. Line up high paying combinations on the reels and win as much as 75,000 credits of your stake.

You can now start your adventure in the magical forest of Mystic Slots in its demo version now available at 888 Casino with no registration required. Players from Canada can also place their wagers here to get free spin and no deposit bonuses from the site.