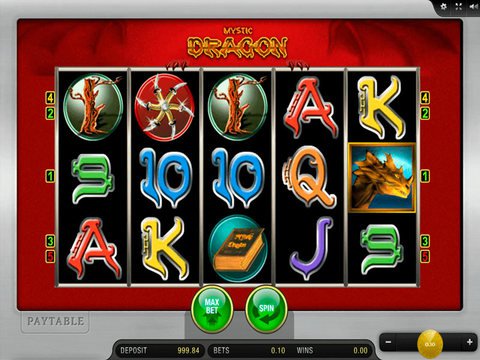 One subject or theme that wouldn't be forgotten in all times of our 24/7 gambling generation are dragons. Their majestic and dominating prowess is something that no one would be able to reject and of course, there are supreme number of choices of slot games under this banner. However, Merkur Gaming definitely did not allow itself to be left behind by the crowd, by setting its fair share of dragon game in the form of its Mystic Dragon Slot Machine. It does not boast the most amazing overall gameplay but with the prestige of this German brand, there's no doubt that there's a twist that would benefit its players. Canadian gamblers and alike have trodden across this game and if you want to do the same but with no registration, no download and no risk to worry about, then the Mystic Dragon free play slot demo here would undoubtedly be your best friend.

Most of the medieval period games where Dragons can be found conquering the reels are adept in terms of aesthetic quality but unfortunately, the Mystic Dragon Slot Machine isn't one of them. Those who highly emphasizes great backdrop and graphics in playing a game would not be the most interested in this one but, if what you want is something that focuses on great rewarding experience in a simple gameplay, then this one is for you. The game plays with a red backdrop that doesn't look special at all but, it is embellished with the 5-column and 5-payline reels at the center which holds the grand symbols of the game. The maximum bet of its fixed pay line gameplay can only reach up to 10 coins per spin which equates to decent yet, not the most lucrative prizes in the industry. The card icons in the game are only the minority of its symbols with not-so amazing prizes. What you have to pinpoint your focus on are the game's draconic symbols from scorched trees, magic book, spinning weapons, a round magic symbol, draconic eye, the dragon himself, and the world of the Mystic Dragon. The mountain symbol is the wild symbol of the game with a pretty amazing prize of about 10,000 coins and that can even be doubled with its x2 multiplier if conditions are met. Another important symbol is the dragon himself because other than giving a lucrative prize of 1000 coins, it is also the scatter which awards a whopping set of free games for you to spend ludicrously.

Dragon is one of the most used subject in the world of Slots and Dragon Emperor Slots from Aristocrat is something you'd love to play as well. It comes with a 5-column and 25-payline reels, showing off up to 243 ways to win and a wide variety of features and characteristics that will attract even high-rollers.

Embark on your journey towards the world of Mystic Dragon Slot Machine, through the Lvbet Casino. This casino may not be the oldest but, it plays in the industry quite well with its lucrative promotions ready to tempt anyone - ranging from match-up deposits, free spins bonuses, reload bonuses, loyalty and VIP programs and even an astounding LV Wheel feature with levels, which is something you would not be able to see at other sites.