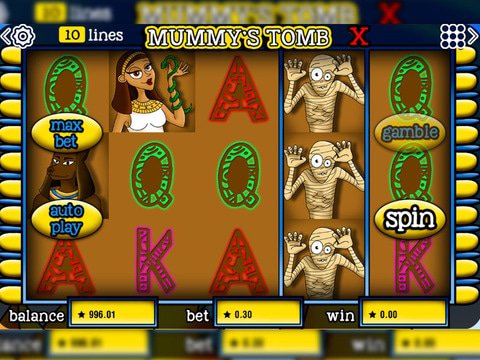 Every wager and even developers would surely agree that Egyptian themed games have become well overused throughout the years of the industry. Still, the hype remains robust and unstoppable, bringing out invigorating, creepy and spine-chilling games one after another. If you're tired of the usual intimidating Egyptian theme reels that are overflowing with historical and ominous vibe, Booming Games Software has the perfect solution for you without going out on the boundary of Egyptian games - the Mummy's Tomb Slot Machine. Contrary to its name, you'll find it extremely hilarious and entertaining as gives a breath of fresh air from the intensity served by its competitors. If you're in need of that kind of breather from all the heavy backstories and alike, you'll be more than happy to spin the reels of the Mummy's Tomb free play slot demo with no registration and no download needed.

Entrenching the Tomb of Mummy

The title may sound ominous, intriguing and not for the faint of heart but truthfully, it takes on a lighter route with fun, cartoon and comical art that's perfect for those who are tired of the competition between what's most innovative in terms of graphics, features and more. The game presents an ultimately simple artwork that appears as if it was harnessed from a Children's book and that's certainly one of its beauties that will keep you relaxed. The audio of the game remains just like what other Egypt games use, but the reels at the center will tell you that it's far from what the norm offers. There's even the mummy occasionally peeking from the back of the reels as though he's up for some mischief fun and excitement. Bets on the game can reach up to 45 coins per spin and though it may appear simple, it still boasts a whopping jackpot of 15000 coins up for grabs. This jackpot is held by the mummy who's trying hard to scare the players while also boasting a wild capability. It is followed by the scatter Pharaoh Symbol, powered by the capability to provide free spins, fitting the role of the ruler along with a 3000-coin payout. Other symbols that can be found on the game includes a dog-like creature, Cleopatra, a woman wearing a big white hat and even simple card icons. The game may be simple and funny, but it definitely takes its rewarding nature very seriously as it is even imbued with a gamble feature for more courageous wagers.

Funny and light take on the Mummy theme may sound good and all just like how the Mummy's Tomb Slot Machine presents it, but there's still a certain beauty that's undeniable from creepy and intimidating Egyptian-themed games. An example of which is the Purse of the Mummy slots from Saucify, boasting a 5-reel and 15-payline gameplay with a background featuring a creepy mummy at the background with lots of hieroglyphic symbols topped with a paltry 5000-coin jackpot.

Make sure that you'll be able to enjoy the Mummy's Tomb Slot Machine at its fullest by playing it via the Tropezia Palace Casino. It comes with superb match-up deposit bonuses, VIP club bonuses and other regularly updated promotions. On top of that, it is highly reputable in the industry with its topnotch security and support.