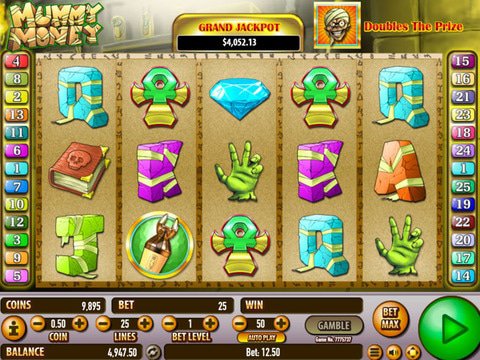 Though the idea of mummifying one's body may seem absurd and bizarre at first, no one can still be able to deny that this kind of burying process for the dead have already become completely synonymous with the Ancient Egyptian Civilizations. However, It is only for those who are of royal blood and thus, it is plain to see that Pyramids holding these pyramids are bound to possess enormous sums of wealth. Habanero has managed to design and develop a game that follows this famous concept which resulted in the amazing Mummy Money Slots Machine. Complete with everything Canadian Wagers love about Habanero, you'll surely be more than happy to give this game a try in this page with the Mummy Money Free Play Slot Demo. You can immediately go towards the depths of this Ancient Building and find yourself some treasures with no registration and no download tying you back.

Mummy Money Slots Machine will take you to a tour around the Pyramid containing the Royal Mummy of Ancient Egypt. The background itself brims with an Ancient atmosphere that you'll surely love, with the reels and controls complementing the colors of the ancient background. Though an improvement on the Audio of the game could surely give a huge boost to its overall quality, the symbols of the game will still be enough to give you a fun and fulfilling time. There are common card symbols on the game, customized to make them appear as though Ancient Colorful rocks wrapped with bandages for mummies. Other symbols pay quite a decent amount, from the mummy hands, ancient book, ankh, diamond, a unique device and an insect. The maximum amount of coins you can get is from the insect with 2500 coins. You could also vastly increase your chances of winning by hoping to land the wilds and bonus symbols of the game. The wilds is signified by the Mummy itself that can be substituted for other symbols, helping you gain winning combinations easier. The Architect Bonus symbol on the other hand has a certain value to itself while triggering multipliers to amplify your winnings with leaps and bounds.

Giving you a broader look of Ancient Egypt at its background, you'll surely be able to enjoy the awe-inspiring experience served by the Wild Mummy Slots. This game, like the Mummy Money Slots Machine, obviously took Mummies in varying directions. Though the art are different as well as usage of audio and controls, both are compelling and beautiful in their own ways. Not to mention, you could also get a stunning $12,500 jackpot from this game, making it an Amaya game that you'll surely want to include in your go-to list of games.

You can never have too many advantages when waging. Maximize your waging conditions and make sure you play the Mummy Money Slots Machine in the most optimal condition possible, by playing the game in Club Gold. Experience the $2250 100% match-up promo of the game whilst reveling on its instant and download play access. Don't be tied down by their lack of free spins bonus, no deposits bonus and mobile version as there's surely more fun and excitement to be had in this site than what meets the eye.