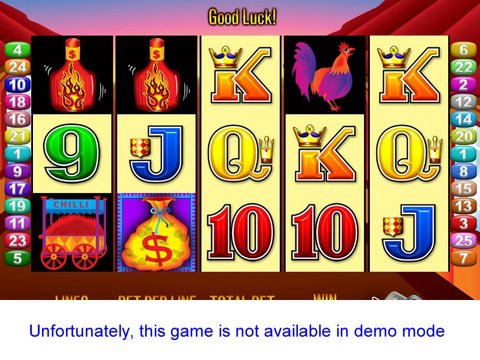 Canadian gamblers who are fans of Mexican fare will certainly appreciate this review of the More Chilli slot machine from Aristocrat. It is available on both PC and mobile platforms and features five reels along with 25 paylines. On them, you will see such things as a Man, a Rooster, a Chihuahua, and a Chili Stand, among others. You can head over to Bet365 Casino where you can grab a 100% match of your first deposit worth up to $200, but if you are interested in a no download and no registration trial, then you can check out the More Chilli free play slot demo that is available on this page.

The betting range associated with this game is quite impressive with a $0.01 coin at the low end and a $2 coin on top. Users can wager up to 30 coins per spin, so at the maximum, this is equal to about $60. While this amount may not appeal to the highest rollers out there, it is certainly a good choice for anyone who is on a budget or who has a medium-sized bankroll. There is no progressive jackpot, but the top in-game prize is 2000 coins that is worth up to $4000 in cash.

This title is a bit different in terms of features, but the idea behind it is to collect Chili Peppers to activate brand new sets of reels with additional wilds. As an example, when you get three or more of the Money Bags, you'll notice that you now have two entire games in front of you rather than just one. Each Chili that shows up is counted on a meter, and when you get to nine, you'll get a third set of reels along with wilds on the fourth and fifth. Finally, when you've managed to collect 20 peppers, you'll get all four sets along with wilds on three, four and five. That's where the huge jackpots come into play!

If you enjoy food-based titles and you're interested in checking out something different, this is a great choice. Another is the EggOMatic slot machine from Net Entertainment that boasts tons of wilds, a free spins round, and a high jackpot of 2500 coins that could be worth as much as $2500 when the highest coin, worth $1, is used.