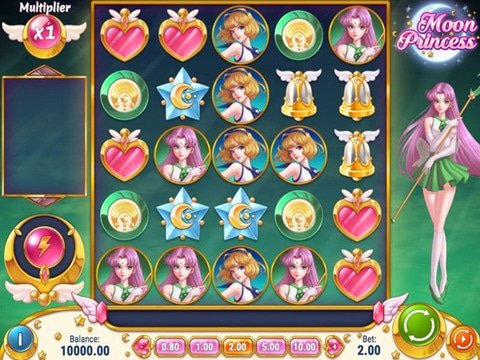 Japanese Culture is one that has already spread far and wide throughout the globe. Varieties of countries have indulged on what they have to offer and unexpectedly, more and more diverse people have shown their complete adoration with Japanese Culture. Out of all the things that have captured the attention of the world, Anime is by far, one of the most influential aspect of Japanese Culture that has long swept the world under its feet. Seeing the magnificence of Japanese Anime, Play'N Go Software has created a game based on one of their classics which is Sailor Moon, which brought forth the Moon Princess Slot Machine. You may think that being this way, the game is geared towards the female population but if you're a true, avid anime fan looking for a rewarding gambling experience, this game is the one for you. Try out the game first with the no registration and no download Moon Princess free play slot demo and see if it clicks with your interest.

Cuteness and Royalty in One

Sailor Moon is rather known for its exquisite female characters imbued with magical powers from the cosmos. Although the characters in the Moon Princess Slot Machine aren't exactly the ones from Sailor Moon, anyone who have seen the anime would surely be able to correlate the two together. The game also features an environment that will make you think of the starry sky and if you think that's already it, there's no doubt that you'll be bewildered when you see the color of the background change accordingly. At the center of the game, you'll see the 5-reel matrix of the game, imbued with a unique setup that doesn't make use of pay lines. Instead of spinning, the game will allow the symbols to exit from below and fall from the above. The winning combinations are determined if winning combinations meet horizontally or vertically. In the game, there are different symbols of the Moon Princesses, from a green insignia, a blue star, a heart and a bell. There's also the symbol of the three moon princesses and a symbol including the three of them. Aside from them, there's also the moon symbol, which basically acts the game's wild symbol. Each Princesses also have wonderful abilities which is love, star and storm. These powerful capabilities are released randomly and only on spins that would not garner you any win. In those dire straits, the princesses may randomly help you to win with their powers and if you even fill up the Princess Trinity and clear up grids, you'll undeniably be in for some huge surprises of more bonuses.

888 Holdings have in fact, capitalized on anime as well with their Evangelion Slot Machine, which is from Neon Genesis Evangelion Anime. The game truly harnesses the actual anime into its 5-reel and 25-payline gameplay unlike the Moon Princess Slot Machine. There's 1024 ways to win in this game which is even more of a reason for you to play it.

We recommend you to play the Moon Princess Slot Machine at Slots Million Casino. Through this site's help, you'll gain 100 free spins from the get-go, dollar-for-dollar up to $100 deposit, and more that's bound to come if you play regularly and prove loyalty to the site.