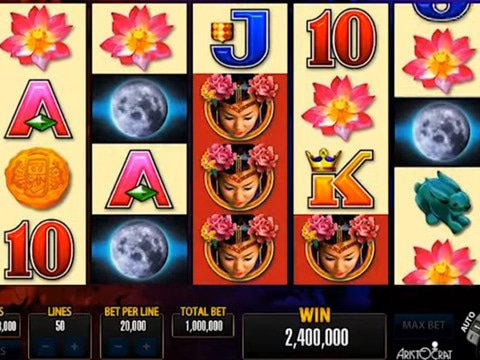 When it comes to games based on the flourishing and vibrant Orient, Aristocrat Gaming has undisputedly produced quite a few already, with some already setting up the Orient-themed category into a whole new level of expectation from users. One such game from Aristocrat that brings the festive mood from China is the Moon Festival Slot Machine. This festival is one that can even be compared to Grand Occasions such as Thanksgiving, Christmas and more. The festive vibe of the theme is what gives the game an incomparably entertaining environment from start-to-finish, making it incredibly more than worth it for slot lovers to try. Whether you're a fan of the theme, the game or the developer itself, you could give this game a review and try it through this demo Moon Festival Free Slot Play. The demo version on this page will prove to be hassle-free with no download and no registration required, which means there's simply no reason for you not to try it.

With a simple background playing with the red, black and blue colors, the game unquestionably brings a mood befitting that of the Chinese Moon Festival. It comes with an intuitive gameplay with compelling symbols and even an auto-spin feature. However, many finds its controls quite lacking as it doesn't have an option for maximizing and minimizing bet with just one click which some players find very convenient from other games. Still, it more than makes up for this shortcoming through its outstanding jackpot prize that's already apparent with a 5-reel, 50-payline structure that boasts a minimum bet of 0.25 and a maximum of 10 coins per payline. The lantern on the game represents the scatter symbol for triggering free spin bonus, while the moon stands for the wild symbol of the game. Intriguingly, the game features a sticky wild feature, guaranteeing that you'll have more chances of winning in each wilds that stacks on top of each other. With massive chances of winning on top of its festive and entertaining environment, you'll surely be more than happy to give this game hours of your time.

There are quite a few Chinese-themed games in the industry already. Some are new while some have already become famous throughout the countless years just like the Moon Festival Slot Machine. One such game that will be worthy for slot lovers to try is the Geisha Wonders that has a firm foundation on the industry already just like Moon Festival. In has a 5-reel structure just like Moon Festival, but with only 30-paylines. Still, it comes with a staggering $20,000 Jackpot prize that's enough to make wagers' knees grow weak and the fact that it's developed by Net Entertainment makes it all the more enticing.

You could play the Moon Festival Slot Machine to your heart's content at many sites, but one site you'll simply find very irresistible is the Slots Café Casino which also has Aristocrat as its Software platform. You could play in it instantly or through mobile, which is convenient as you could play it anywhere as long as you have internet. Not to mention, you'll surely be taken away by its generous dollar for dollar promotion up to $200 with 50 free spin bonus and regular no deposit bonuses, giving you ultimate advantages you could ever hope for.