Monopoly Bring the House Down
Enjoyed playing this game?
Rate it → 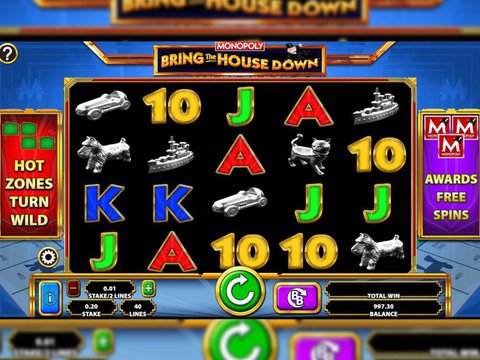 Monopoly Bring the House Down

Monopoly has already become a legend as a table board game which is originally what it was intended for. However, its legend is so resounding that it even spread its wings on the Video game world where it equally became famous. With seemingly no way of stopping, it also entered the gambling industry and gain varieties of versions. The Barcrest Software has also created a game based on the famous monopoly game and has introduced to the market, the Monopoly Bring the House Down Slot Machine. Without a doubt, this game stays true to its roots and if you are especially fond of the Monopoly game, you'll be able to experience double the fun with the nostalgia you're getting here. Feel free to enjoy a risk-free version of the game though anytime, with the no download and no registration Monopoly Bring the House Down free play slot demo in this page.

A Board Game Turned to Slots

Turning a board game into a slot is definitely not hard. Just take the elements of the game and use them as symbols and voila! You have a slot. However, it's an entirely different concept when turning a board into a great slot game. This is exactly what Barcrest Software has done with their Monopoly Slot. The game's background feature a blue color but looking at it more closely, you'll see the board game of monopoly at the back which will surely make you want to reminisce the days when you've played with it. The center is where the 5-reel and 40-payline structure of the game is located with a simple yet completely robust appearance that makes the game look firm and convincing. The symbols of the game includes card icons that are low-paying, with the game characters or pieces as the main stars of the game. Each character piece has their own equivalent pays which you can accommodate with through the pay table of the game, conveniently placed on its comprehensive control system. There's also the Wilds of the game, which can obviously bring you the jackpot of the game with up to 200x your actual bet. If you think that's it, think again because beside the reels, you'll see the hot zones and the purple zone embedded with two different extra features of the game. There's the green hot zone which can turn symbols to wild while landing the Monopoly symbol will simply award you with lucrative free spins. If you're feeling lucky and you want to try and gain an explosion of wealth, choose the Big Bet option at the controls to enter a more intriguing bonus section of the game.

With the fame of Monopoly, it isn't surprising that there's also the Monopoly Slot machine from IGT. However, this game looks more like a classic reel with few unique twists in its 5-reel and 9-payline setup. Still, the game comes with up to $25,000, giving you no reason not to give it a try.

We recommend you to revel on the Monopoly Bring the House Down Slot Machine at Drueck Glueck Casino. This casino has been in the industry for decades and can offer you an array of welcoming match-up promotions up to 175 free spins all spread out into 3 initial deposits in an increasing maner.