Money Back Special
Enjoyed playing this game?
Rate it → 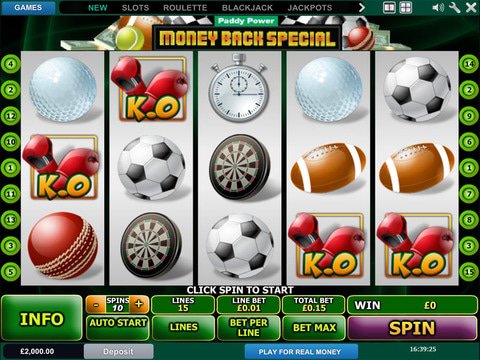 It may be hard to pinpoint at first what the Money Back Special Slot Machine has in store for players in terms of theme, but there's no doubt that any wager would have estimated it to be a great one since it's from the renowned Playtech Software. Though far from its name, this game features a unique sport-themed environment that would have certainly been a long shot from what you may have initially guessed. However, its sports theme is certainly not the source of the game's name. If you're curious and intrigued as to what makes this game incredibly special even on the line of products of Playtech itself, then go try it out for yourself in this Money Back Special free play slot demo. Review the game and fret not since you won't have to risk anything in this free demo version.

The first question that will surely pop up in your mind when you realize that the Money Back Special is a sports-themed game, is where the Money Back term stemmed from. In fact, this title refers to the game's special money back bonus that will grant you 50x of the line stake you've made, in the occasion that you still haven't win after 50 consecutive times. This makes sure that you wouldn't get out empty-handed from this game even if you're on your unluckiest day. The game exhibits a 5-reel and 15-payline matrix with an intricate and detailed control system you'll be able to easily use on your whim. There's lots of symbols involved in this game which you can easily see through the information button provided in the controls. There are darts, golf, tennis, soccer, bowling and American Football balls, boxing gloves, timer and trophies. The Gold medal is treated as the wilds paired up with the highest possible winnings as well, while the bowling is treated as the scatter of the game that could award lucrative multipliers and free spins to lucky wagers. Though the visuals of the game may not be the most compelling, it still comes with high-quality art paired up with massive winnings available, which are truly qualities that will get any wagers hooked to it.

Another sports themed game you'll want to try is the Olympic Slot by SkillonNet. It is more obviously inclined on sports with its name alone, and there's no doubt that since it's an Olympic-themed game, you won't run out of different sports to play with here. It plays on a 5-reel and 20-payline gameplay while bringing out up to a staggering $20,000 jackpot that would surely end up reeling in devoted players from left to right.

Though the Money Back Special Slot Machine and its superb promo is truly more than enough to make anyone motivated to play it in any site where it is available, it is still recommended to remain calm and logical in choosing a site to play at. Our recommendation to players is to play the game at Slots Heaven Casino. In this site, you'll be welcomed with vast promotions from match-up deposits, free spins deposits and no deposits bonus. You could also play it via your phone, download or instantly, providing superior convenience to players.