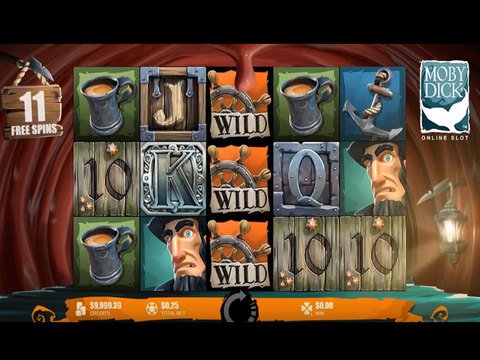 Explore the ocean with the powerful whale named Moby Dick. This whale has the ability to destroy a whole ship and has the power to give players huge amount of cash as well. All these are possible by playing the Moby Dick slot machine. A free demo version of the game is available on this page with no download needed. Players can review the game and train the whale to yield more prizes.

From Novel to Moby Dick Slot

Upon entering the gaming console, players will be welcomed by a raging ocean where waves seem to be hitting against the screen. The novel written by Herman Melville has been perfectly turned into a gaming machine as the ship of Ishmael is also present beside the reels. Microgaming software has been inspired by the adventure of Ishmael and Moby Dick, hence we now have this amazing game.

Moby Dick slot machine has 5 reels showing different symbols related to the Melville's novel. An anchor for the ship, a mug of beer for the sailors, and an image of the whale are just some of the icons that players will encounter during the game. The common playing card symbols such as 10, Jack, Queen, King, and Ace are also present to sail with the players. Matching three or more similar symbols can absolutely give players a giant reward.

Once a player is ready to join the sailing adventure, they must place a bet on the 25 available pay lines. The maximum amount of bet that can be placed is 50 coins for a single spin.

Aside from watching out for the great white whale, players should also keep an eye on the special symbols such as the wild and the free spin scatter. The wild symbol is represented by a ship's wheel. This wheel can navigate through the ocean and can replace other symbols to create winning patterns. However, the ship's wheel has no ability to substitute as the scatter icon. The mouth of Moby serves as the free spin scatter. Yes, it is scary to see a whale's mouth wide open, but it can give players up to 20 free spins. Four scatters can yield 10 free spins, while 5, 6, and 7 can give 12, 15, and 20 additional spins respectively.

More Threats on the Ocean

Other than Ishmael, there are more people sailing in our ocean of gaming world. The Pirate's Gold slot machine powered by NetEnt is one of them. This game is a nice option for players who want an ocean-themed game that has lower pay lines. Compared to Moby Dick's 25 pay lines, the Pirate's Gold has a lower pay lines of 9. However, both games take pride on the 5 available reels on the screen and not to mention the cool graphics.

Players residing in Canada may also enjoy the Moby Dick free play slot through Jackpot City Casino. Jackpot City is absolutely the right choice for Canadian players because of its mobile friendly user interface. Other than that, the gaming site let the players access the trial mode with no registration asked. It is also worthy to mention that Jackpot City have plenty of free spins and bonus to give away.