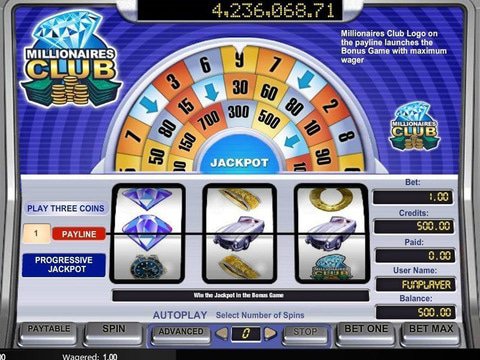 Despite the seemingly endless innovations being done in the waging scene, the purpose of gambling for users haven't changed even one bit. Though there are some who places great importance on enjoyment and exciting features and visuals, no one would be able to deny that profit and prize is still the pinnacle reason for waging. With that in mind, wouldn't a straightforward game with big prizes be as good as any other extravagant games today? Amaya Software proves this point as it provides a stunning masterpiece with the title, Millionaires Club 1 Slot Machine. Classical games exhibits a unique and tantalizing beauty on their own, making this game something to look forward to. Just from the name itself, it is easy to see that the game's most attractive point is its rewarding nature. If you want to learn more about it, the no registration and no download Millionaires Club 1 free play slot demo in this page will help.

The first from a Grand Trilogy

With just its title, one would be able to form a guess that the Millionaires Club 1 Slot Machine is just the first that marked the entry of an amazing sequel, more specifically, a trilogy. It is a game that's aimed to get members for a club that's filled with people whose pockets are overflowing with cash. It may not be you at your first entry, but the more you spin its reels, the more chances of you becoming part of this grand club. The game exhibits a very simple yet incredibly crisp and robust graphics. The reels are placed at the lower half of the machine at the center, giving you a clear view of its 3-reel and 1-payline structure. You can bet up to 3 coins per spin while you can also put the game on auto-play mode if you want to sit back and enjoy the spinning reels. Of course, each symbol and combination in the game are not equal to each other from a diamond, horse shoe, luxury car, golden ring, Rolex Watch and a ship down to number of combinations. The highest could rise as high as 1500 coins prize while the Millionaires Club Logo brings players to the game's renowned bonus feature placed at the top of the slot. This is also the key to win the stunning progressive jackpot of the game that could get you a life-turning sum of money derived from accumulate prizes from the trilogy.

Another game that will let you take a peek at a luxurious and grand life like the Millionaires Club, is the Glam Life slot created by Betsoft with a 5-reel and 30-payline matrix. It boasts crisp, clear and vivid graphics while its art highlights luxurious symbols from limousines, cocktails, yacht, diamond rings and more. Luxurious as it may be however, the game does not have the most tantalizing jackpot prize.

If you want to join the Millionaires Club 1 Slot Machine and earn its grand prize, it is better to increase your feeble chances by playing at Cresus Casino. With this site, you'll have more to spin with through 20 free spins bonus and dollar-for-dollar deposit match-up to $150. There's also Loyalty and VIP bonuses to indulge on while stellar customer service and security backs up your experience.