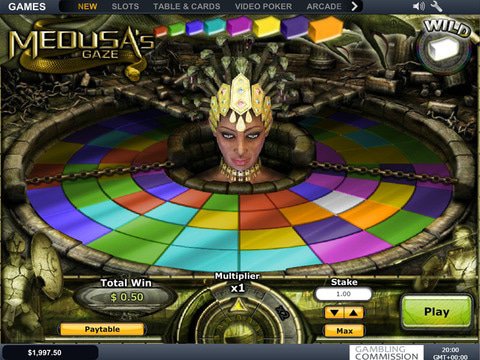 Since primordial times, tackling the otherworldly and mystical world of Greek Mythology has always been a very challenging task whether it be on novels, movies and even on games. Still, this challenging nature didn't stop developers to push it through the waging industry and in fact, there seems to be a massive amount of Greek Mythology games you could choose from nowadays. From Greek characters, Medusa has always been one that's most portrayed in many different ways. Some gave her dazzling features while Playtech decided to go on a different route and portray her in a more realistic manner. The result of this is the Medusa's Gaze Slot Machine. Play the Medusa's Gaze free play slot demo and review yourself how it managed to make its way to the top of the industry and how it took away the breaths of players without turning them into stone.

In this game, Medusa is portrayed as a green-bodied gorgon, evidently equipped with her Serpent hair that brings more thrill to the environment of the game. The game plays on a very unique gameplay that will surely be far from what you'd expect in an online slot. The setup happens in a kind of chamber of Medusa while her head and serpents can be seen popping out of a small hole with her gaze fixed at the front. The bigger circle contains various blocks with different colors while only those at the front is what Medusa could see. The game works by getting three or more blocks matched to each other, in front of Medusa. Each matches will be destroyed by Medusa and you could get executive wins from this kind of collapsing feature. Each consecutive collapse or cascade will increase payout with multipliers, which may just be what you need to defeat Medusa. If you've already mustered up the courage to defeat Medusa at her own lair, then do your best as you may even get the chance to bring home lots of prizes that could hit up to a whopping 10,000 your bet with the orange block.

Explore the Greek Mythic World in a more historical way as you plunge deep into Ancient Greece and visit Medusa in a unique route through the help of the NextGen Gaming product, Medusa II. It comes with a gameplay that's more common for slots compared to what the Medusa's Gaze Slot Machine offers, while its 5-reel and 243 ways to win makes sure that you'll be able to get astronomical prizes along the way. There are lots of luck bonuses in the game while stacked wilds and other special symbols makes sure that you'll be able to garner more than what you could have ever imagined.

There's no other task that could be as dangerous as what the Medusa's Gaze Slot Machine entails - going to the lair of Medusa herself. When you're there, make sure that you grab all the treasures with the best possible conditions by playing the game at one of our most suggested site for Playtech Casinos, the Slots Heaven Casino. Outstanding security, availability, customer service and a plethora of bonuses await you in this site, making it a place that any wager would find very irresistible.