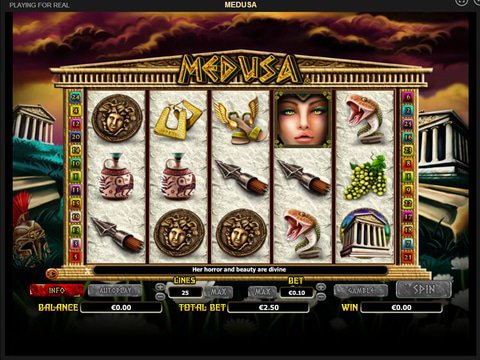 Medusa, in Greek mythology, was a monster generally depicted as a winged female with venomous snakes for hair and a hideous face. Those that gazed upon her face would turn into stone and most sources described Medusa as the daughter of Ceto and Gordon. She lived her life on an island called Sarpedon and until now she was only a story from Greek mythology. After eons, Medusa finally has her own free play slot where this goddess is portrayed with a gorgeous face and glowing green eyes.

Developed by NextGen Gaming, the Medusa slot machine is presented across 5 magical reels with three rows and features 25 adjustable pay lines. The background takes place in Acropolis of Athens where dark clouds are looming as thunder, strong winds and lightning occupy the skies. The city appears deserted as everyone is hiding from Medusa. She's so close to your hideout that you can hear the snakes on her head making a distinct hissing sound. The symbols are beautifully rendered to portray the sinister representations of everything relating to Medusa's story, including broken spears, grapes, vases, winged sandals, golden earrings, snakes, bronze coin with Medusa's face, warrior statues and a temple paying the highest jackpot bonus worth 5,000 coins.

NextGen Gaming's Medusa slot machine invites players from Canada, as well as slot fans from around the world, to enter the city of Athens in an attempt to conquer the goddess which will be available on a wide selection of different platforms such as Desktop, Mac and mobile, ensuring you have access to this gorgeous game wherever you might go. The Medusa video slot can also be enjoyed as a free play slot or demo game where no download and no registration will be required, giving you the perfect opportunity to test the mechanics behind the game before loading your casino account with funds. Medusa comes with a variety of betting choices to suit any kind of slot player with 25 adjustable pay lines and 7 different coin denominations ranging from $0.02 to $5.00. The minimum you can place on a single bet starts at $0.50 and peaks at a maximum per spin bet of $125.00. The Medusa slot machine also comes with a theoretical return to player ratio of 95.18%.

This video slot features an arsenal of bonus symbols including Medusa herself acting as the wild symbol, appearing on reels two, three and four and becomes an expanding wild symbol when she substitutes for all standard symbols except the scatter symbol and the Pegasus bonus symbol. The scatter symbol is represented by the Medusa logo and is the key symbol to unlocking one of the bonus features in the game. The special features include the Turned to Stone Re-Spin feature which is activated by displaying three Medusa wild symbols on reels two, three and four. She will then utilize her ability to transform objects to stone just by gazing at them. You will receive 3 re-spins with an expanding wild symbol being frozen in place on one of the reels. All wins during the re-spin feature will also be tripled. The Once Bitten Bonus feature is triggered by displaying three Medusa logo scatter symbols anywhere in view and you will instantly be awarded with 10 free spins. All wins during this feature will be doubled and if you land a Soldier symbol on reel three will reward you with Super Spins. Every soldier you land during the initial free spins round will be spun after the initial 10 free spins are finished. Wins during the Super Spins feature will be multiplied by 5x as well. The Pegasus Bonus feature is activated by landing three Pegasus bonus symbols anywhere in view. You will then start a mini-game where you'll need to pick one of the bonus symbols to reveal an instant cash prize.

Medusa slot machine is aimed at fans who love numerous bonus features in one location and with the dramatic sound effects and superb graphics, slot enthusiasts will quickly find that this Medusa-themed demo slot is one of the best games around. While our review is ideal for those with a penchant for Greek mythology slots, another of which is Atlantis Queen, a slot from Playtech. It offers a wonderful experience filled with wild symbols, scatters and an interesting bonus game as you join Poseidon and his friends on the reels.

Videoslots.com is our recommended place to play for all NextGen Gaming slots including Medusa free play slot. This Canadian friendly casino offers a huge number of different software suppliers including Play'n Go, Yggdrasil and Microgaming as well as Thunderkick, Push Gaming and many others. Registering today you will be welcomed with a 100% match bonus up to $100, plus you can join its weekly races, win free cash and enjoy daily tournaments.