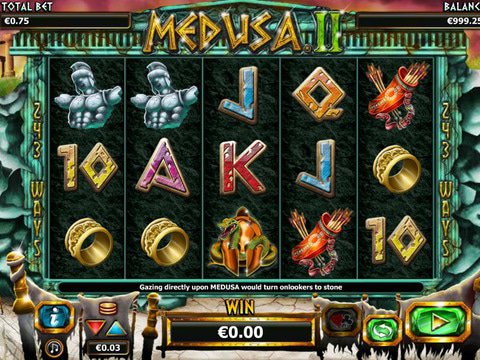 Getting on adventure towards the world of Greek Mythology has always been something extremely invigorating and exhilarating just about for anyone, especially Canadian gamblers. This is all the more true if you're going there with the thought of not visiting the good guys, but one of the most infamous villain in their mythical world, Medusa. Enjoy the ravishing Kingdom of this extremely gorgeous and more than feisty Queen as you play the NextGen Gaming product, Medusa II Slot Machine. If you pretty much know your way around Greek Mythology, then you probably know the most dangerous thing to do in front of Medusa "" to stare directly at her eyes. Will you be able to conquer the already Destroyed Greek Cities doomed by Medusa and earn riches while she's guarding? Find out yourself by giving the game a review through the Medusa II Free play slot demo in this page.

Delve into the Mythic World of Medusa II Slot Machine

The near-destroyed Greek Structures afar and the ominous presence of the sky along with arrows occasionally falling in an incredibly animated background completes a very intoxicating aura from the game that will surely stimulate any wager's love for slots. You'll even be welcomed by Medusa as you enter the game who looks stunningly beautiful and sultry despite the fact that she's got one of the most dangerous powers in her Universe. The reels at the center provides an imposing vibe that certainly matches that of the majestic aura of the Greek City while the symbols themselves fit in the game perfectly. The game breaks from the common paylines and provides a ravishing 5-reel and 243 ways of winning structure. Excluding the card icons, the symbols of the game are extremely symbolic to the theme, from a golden ring, arrows and quiver, a stoned soldier, an emblem and a helmet with a snake. The powerful Medusa acts as the Wilds of the game which appears in a stacked form for better aid to your endeavor. There's even a soldier that could randomly appear in any reels to give Medusa a beating, who will then fail and turn into a stacked wild himself. You should also keep a lookout for the Game Symbol which is the scatter that will bless you with multipliers and free spins for more chances of bringing home glory.

Just as the name implies, the Medusa II Slot Machine is a successor of the first game. You could enjoy and play the Medusa Slot Machine from NYX gaming and enjoy dual the fun with one theme. The game has different elements on the screen, but both are visually compelling. It comes with a 5-reel and 25-payline that produces about 5,000 coins for jackpot. Though it's not that much, the experience it brings is what makes it special and that's something that many wager would certainly love.

Going to a world filled with Greek Myths is already as dangerous as it gets and there's no doubt that while there, you would certainly love to make the most out of the time and get as much treasure as possible. Our suggestion to players to achieve just that is to play it at Slots Million Casino . Match-up bonuses, free spins bonuses and more benefits makes this site one of the best you could choose.