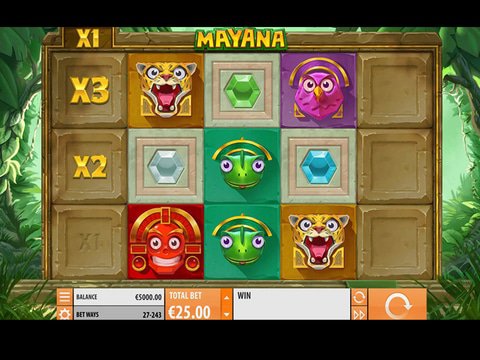 Head on to the jungle and see how the gems of this Mayan-themed machine can give luck. Take a preview of the Mayana slot machine using the free demo version on this page. This free trial needs no download as players can easily access the game anytime they want to review the game.

There are plenty to expect in this gaming machine powered by Quickspin. The said software developer has created a game that has an interesting layout and symbols. Icons within the reels show different animals that are usually found on a jungle. The game also features some gems and symbols inspired by Aztec culture.

Mayana slot machine has a primary 3 x 3 grid of reels, giving players a chance to bet on its 27 pay lines. The interface of the game has an interesting add-ons. On the left side of the reels, there is a multiplier bar that constantly increases depending on the combo that the players hit. Aside from being a multiplier bar, the said part can also be turned into an extra reel.

The 3 x 3 reels of the game may extend up to 5 x 3 reels when the luck is on favor of the players. With the continuous winning combination, the two extra reels at both sides will be unlocked. The 27 pay lines of Mayana slot machine will be increased into 243 ways to win. However, when there are no more winning patterns, the additional reels will be locked again.

A re-spin feature may also lure players as the winning combinations may stick on the reels until all the reels are filled. This can definitely increase the prize to be awarded to the players. The game seems to have unlimited surprises for the players because it also has the Mucha Mayana feature. It can be randomly triggered during the game wherein the multiplier of winnings can spike up to 20x. Any amount of winnings during this moment will be multiplied by 20 times. No wonder that this game has 96.63% return to player percentage.

Inspired by the old era, Mayana surely gives players a nice glimpse of the past. Aside from this game, players may also want to give a try on the Spirit of Aztec slot machine developed by Playson. This is the perfect choice for players looking for a game with the same theme as Mayana, but has a fewer pay lines. Spirit of Aztec features 21 ways to win. The betting range of the said game is 0.01 to 1 coin, lower compared to Mayana. Nonetheless, both games gave their best in portraying the ancient ambiance from the old civilizations.

Mayana free play slot can also be accessed in Slots Million Casino. Canadian players may enjoy the said trial version with no registration asked. The gaming site is popular for having lots of free spins. Players can also receive huge bonus on Slots Million. Mobile gamers may open the gaming site using different devices such as mobile phones or tablets.