Masters of the Sky

Masters of the Sky
Enjoyed playing this game?
Rate it → 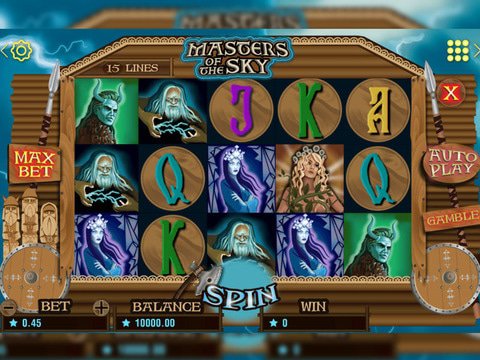 Masters of the Sky

Masters of the Sky Game Review

Almighty and powerful creatures possessing powers beyond humans' capacities have turned gods, warlocks and more mythical people from folklores, turned them into center of idolization for various tribes and even Ancient Civilizations of the past. One of the most known mythology runs down deep into the Nordic regions, giving rise to the Nordic myths gave birth to new Gods and characters that have shook the very foundation of Legends and Mythic Fantasy. Booming Games Software aimed to add another game to their ever-expanding library centered on this genre - the Masters of the Sky Slot Machine. By far, it's one of the company's biggest games and most renowned addition, making sure that it'll leave up beyond what you believe it could possibly do. Will it be enough to on par or topple down other God-themed games? Find more about the game with no registration and no download needed in this page and its Masters of the Sky free play slot demo.

Overlooking the Sky with the Eyes of Gods

Visually, the game is a bomb that's just waiting to explode on the face of users for a grand, invigorating and electrifying experience. Is simply surreal and the game's slick and seamless animations and movements makes it even more engaging, immersive and tantalizing. The background shows the sky covered in ominous colors and spine-chilling bolts of lightning while the reels that takes up most of the game's screen is designed and protected with a structure made of logs. It comes with a highly detailed and ostentatiously design ornaments from shields, pikes and even wooden statues of Gods, making it appear more from the Nordic Myths and Vikings. At the side of the 5-reel and 15-payline structure of the game, two bolts of lightning are continuously striking from high above, giving you a more dramatic appeal to the game. The maximum bet in the game comes in 45 coins per spin and that will give you a stand to win up to 30,000 coins from the Zeus-like character of the story that turns out to be the wilds of the game as well. This character also has another symbol where he seems to be morphing lightning and that counts as the scatter of the game that will rain you with free spins if possible. There are also other Gods in the game from a Demonic Horned God, to a mysterious and ominous gothic girl and a blonde goddess. The game comes with a generic setup from the Booming Games Software with a special gamble feature to give you a chance to increase your wins further.

Another Nordic-themed game that would set your bloods afire is the Nordic Heroes Slots from IGT. It is set with a 5-reel and 30-payline structure with graphics that are just as good as the Masters of the Sky Slot Machine. On contrary however, it doesn't tackle much about Gods, but it does serve hot jackpots that even exceeds the Masters of the Sky, ticking at a whopping $600,000.

If you'd like to make sure that you get the most out of your Nordic Adventures in Masters of the Sky Slot machine, we suggest going to Tropezia Palace Casino. It has outstanding bonuses to give you more juice for spinning covered with superior security, banking options, customer support and more.