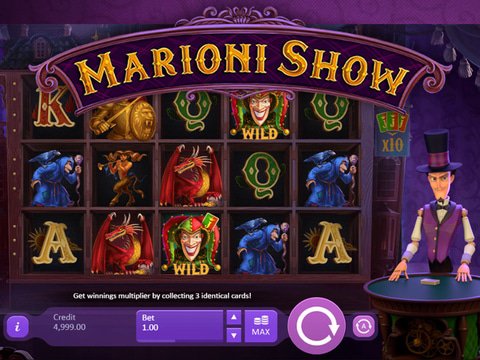 What could be better than a magic show and a slot machine fused together to make an outstanding game that will surely be a head-turning and mesmerizing one? Playson Software has unraveled the mysteries of magic and taken it up on itself to bring it to its gamers through the power of the reels. With these two dominating forces to be reckoned with in a single platform, even Canadian gamblers failed to resist its outstanding and jaw-dropping offers and features. Whether you're a fan of this type of game and magic or even if you're not, you'll surely find it superb either way. Find out more about the intricate and in-depth details which makes this game so awesome through the no registration and no download Marioni Show free play slot demo version here, to bring you the aid you need.

Abracadabra your way to Jackpot

If you're expecting more of the common magic show you see in television or more forms of media today, think again as Playson Software aimed to distinct itself from its competition with the Marioni Show Slot Machine. Other than the common shows, Magic is also known in the medieval period and that's just where the reels of this game will take you. The overall mood of the game is dark and suspenseful, creating an exhilarating vibe that will just make you anticipate of what's going to happen next. There are various types of creatures, witches, princesses, dark knight and a golden knight. There's also the joker wild symbol of the game which has the power to make your game easier with its substituting capability. When you trigger scatters and get free spins, the wild turns into Extra Wild Symbols which also grants additional free spins if you get them on your winning spin during free games. Multipliers are also extremely satisfying in this game as it can be achieved through a witty and engaging feature. The magician is the one assigned to bring you the multipliers and you only get a multiplier if you get a winning spin and the magician draws out three multipliers with the same value. If you get three consecutive wilds on the base game, the magician will be given three additional jokers that will award you with x10 Multiplier. Another interesting addition to the game is the black and golden Knight wherein the former coms with 15 free spins and the latter has x15 multiplier. You can only get one of this award at a time, when the golden and black knight face each other in a bout and you'll choose who to side with.

What speaks more about magic other than a magician? A Wizard will do and the Path of the Wizard slots from Microgaming will surely give you a game to revel on every time. It's got 25 paylines on its 5-reel matrix with stellar gameplay and graphics you'd expect from such a big brand. The jackpot in the game is 2500 coins and utilizes many features to boot.

To make the most out of your time and money in playing Marioni Show Slot Machine, we recommend you to get your spins going at Slots Million Casino. Here, a dollar-for-dollar match-up to $100 will welcome you with other forms of bonuses and advantages to improve your experience.