March of the Mehteran
Enjoyed playing this game?
Rate it → 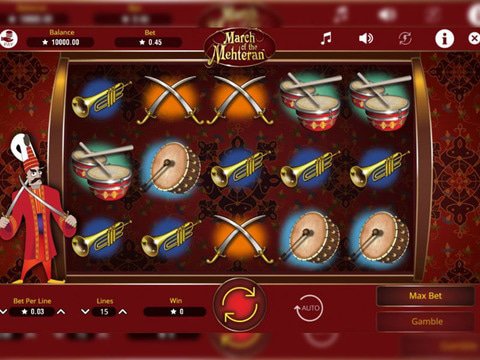 March of the Mehteran Game Review

With Ancient Egyptian Civilizations taking a wide part of the history of Egypt in different points in time, before and after the death of Christ, it is not very surprising that there's towering games out in the slots industry that tackles its enormous and prestigious temples, culture and beliefs. However, this vast amount of games in this same genre made many lethargic towards it already as they look for something a lot more different than what the norm already offers. The recently rising Booming Games Software has added just the perfect game to counter Egyptian games in the form of the March of the Mehteran Slot Machine. Not everyone is well informed about this term, but Mehteran is from the Ancient Turkish Empire, Ottoman, giving you a breath of fresh air in a pool of the Egyptian-laden industry. The March of the Mehteran free play slot demo in this page comes with no registration and no download needed so jump right in and learn more about it.

Music and History in One slot

More often than not, historical and musical genres have always been separated by a fine line as the two tends to keep their worlds pure as they serve what they offer to players. The March of the Mehteran Slot Machine begs to differ as it offers you one of the oldest military band that has stood tall for centuries. Whether it's the music or the graphics of the game, you'll surely see that the game certainly has a deep inclination to music. It comes with red regal and royal background and a control system to match-up its overall design. At the center, lies the 5-reel and 15-payline matrix of the game, which holds various symbols that coincides with the subject of the game. Here you'll see not only trumpets or drums but also the musicians playing a chime-like instrument and the cymbals. There's also a sword which symbolizes the military aspect of the band. The chime-like player comes with a whopping 675 coin payout, but what makes it even more special to the reels of the game is its scatter symbol status which allows it to grant generous free spins to players. The cymbals player plays the role of the wild that gives it the capability to be substituted for other symbols while also boasting the possession of the jackpot of the game that ticks at 75000 coins. The game also has a gamble feature available, for those who want to try their luck further by risking their winning spins for double-or-nothing special guessing stage.

Another Ancient Civilization game that will be worth your time and money is the Scrolls of Ra Slot Machine. Unlike the March of Mehteran Slot Machine, it takes the common Ancient Egypt Civilization as its core, but has placed twists on it through the help of its developer, iSoftbet. It has a 5-reel and 20-payline matrix, riddled with lots of symbols in hieroglyphics and more that accentuates the game's atmosphere, topped with a 10,000-coin jackpot.

We recommend players to support and play the March of the Mehteran Slot Machine by spinning its reels at Tropezia Palace Casino. Outstanding security, banking options and customer service awaits players of the site along with innumerable bonuses of various types to increase your winning chances.