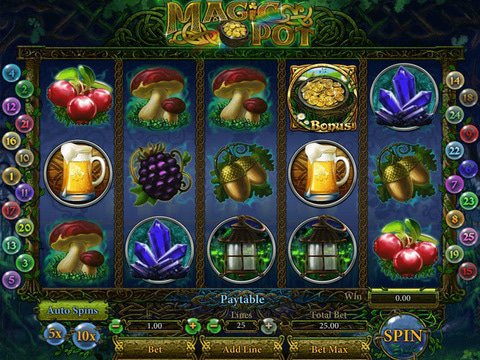 Get to try your Irish Luck and look for the majestic pot of gold at the end of the rainbow to win big in Magic Pot slot machine. In this featured slot game, you are set for an adventure with your leprechaun buddy to search for hidden treasures and the elusive gold pot deep into the forest. Ask help from the leprechaun himself as he tries to win you with more exciting rewards and special bonuses. You can now test your luck and spin your reels of fortune in this free play slot machine which is now available here with no download required.

This five-reel slot machine developed by GamesOS software has 25 paylines its online and mobile players can wager on. You can place stakes for as low as 0.01 coins up to 5 credits per line. Win as much as 1,200 coins when you play with the max wager per spin.

There are various reel symbols in the screen which have different payout equivalents. The lowest paying characters belong to the fruit symbols which pays you up to 60 credits. The mystical mushroom and precious crystal symbols reward you as much as 120 credits. The lantern which lights your way in the forest grants you 150 coins; while the pint of beer gives you up to 300 credits. Look out for the missing boot as it rewards you as much as 600 credits of your total wager.

The highest paying symbol belongs to the four leaf clover which instantly pays you with 6,000 credits. It also acts as the slot's wild symbol wherein it replaces any character on the reels - except for the bonus scatter - to complete a winning line.

The scatter, represented by the pot of gold, brings you all the luck in Magic Pot slot machine. You just need to land three or more scatters to trigger the two scatter bonuses. The first bonus instantly rewards you with several multipliers depending on the number of scatter symbols on the reels. Win as much as 6x, 60x, or 300x of your total stake when you land 3, 4, or 5 of this character respectively.

The other bonus round involves a giant map which unfolds on the screen. You get to choose from the tokens laid on the map to reveal the treasures beneath them. Collect as much cash prizes as you can before you pick the token with an "X" mark under it. This special feature will surely rack up your total winnings in Magic Pot.

If you feel lucky enough, then you should also try iSoftbet's Lucky Leprechaun slot machine. Lucky Leprechaun slot machine has 5 reels and 30 paylines which you can wager on for as low as 0.25 credits per line. Collect pots of gold on the reels as it will reward you with the jackpot at stake. Since this slot has three progressive jackpots, you will surely end up as a big winner - and not just by luck.

You can now try Magic Pot's demo version in 888 Casino with no registration required. All players from Canada are also welcomed to play with real money wagers to get exclusive free spin and no deposit bonuses from the site.