Magic of Oz
Enjoyed playing this game?
Rate it → 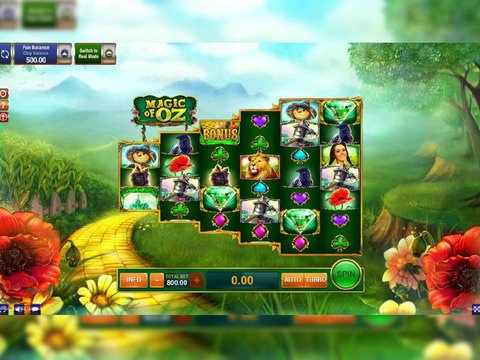 You can now step into the magical world of Dorothy, Scarecrow, and Toto from a famous children's book in this new slot game from GamesOS software. In Magic of Oz slot machine, you get to venture the mystical yellow brick road which leads to Emerald City where loads of rewards awaits you. Get to meet other characters from this popular fantasy story as bonus rewards also flock in your every spin. You can now experience the true magic of this free play slot machine in this site with no download required.

This slot is really full of unexplained mysteries as it has six irregular reels which line up in a weird manner on its 80 fixed paylines. Online and mobile players can place stakes for as low as 0.01 up to 10 credits per line.

Feel the true magic on the screen when you land various combinations on the reels. These include lines of card suits - heart, clover, spade, and diamond - which reward you up to 120 credits. The symbols of the mystical flower, crow, and Toto grant you as much as 200, 250, and 300 coins respectively. The Tinman pays 500 credits; while the Scarecrow rewards you up to 600 coins.

The highest paying characters are the Cowardly Lion and Dorothy herself which pays you as much as 700 and 800 coins respectively. Get these equivalent payouts when you land six images of these characters in an active payline.

Enchanted Bonuses from the Reels

You should also watch out for the emerald stone found on the reels. This precious stone represents the slot's wild symbol which substitutes to any other character, except for the scatter, to complete a winning line. It also pays you 900 credits when you complete a line with this symbol.

There is also a Featured Wild Symbol which appears on reel 1. This gives you 2 bonus re-spins with all other wilds frozen on the screen.

Land the yellow brick pathway symbol on the first three reels to activate the Magic of Oz slot machine special feature. During this special feature, you are rewarded with three spins and a 1x multiplier which may increase during the feature's bonus games.

These bonus games include the Pick a Gem round where you can earn more picks for the next bonus round - the Diamond Arrow round. During the Diamond Arrow game, you get to use your accumulated picks from the previous round to pick purple or green diamond arrows to earn in-game multipliers or more free spins.

Aside from Magic of Oz, you can also try WMS' Wizard of Oz Ruby Slippers slot machine for another wizard-based game. In Wizard of Oz Ruby Slippers, you get to meet again the famous characters of the renowned story as they try to assist you in performing different magical combinations to win big on the reels. These characters also trigger special in-game features which grant you extra rewards and bonuses.

If you really want to immerse yourself in the magic on the reels, then you must now try Magic of Oz's demo version in 888 Casino with no registration required. Canadian players can also participate in this site to get exclusive no deposit and free spin bonuses.