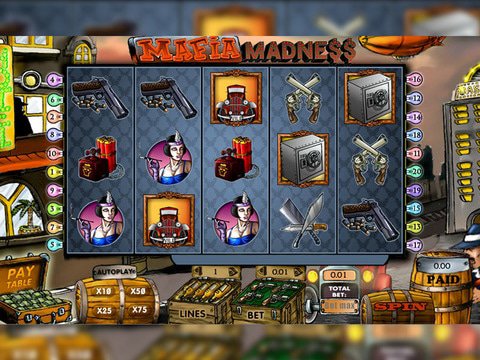 It may not be the case for all, but there's certainly some out there that had surrogate experiences of being part of the Mafia or other Crime organizations, especially while watching movies, television shows and more with this genre. There are even video games in this genre that have taken the attention of various gamers. Now, even the gambling industry harnessed the exhilarating experience of this concept and turned it towards the reels. Banishing the suspense, the game you'll surely love in this genre is the Mafia Madness Slot Machine, developed by the revered and critically acclaimed brand of 888 Holdings. It has already entered the mainstream of the industry and have captivated even the pickiest Canadian gamblers out there. Enter the devious and chaotic world of this game through the no download Mafia Madness free play slot demo rendered here. You'll have no worries as it also need no registration and you could enjoy the action right off the bat.

Delve in the Chaotic World of Mafias

With the heavy theme pertaining to the Mafia, a world-renowned Crime Organization, it is only a given that the perfect approach to balance it out is with a cartoon-like art. Still, it portrayed Mafia in a marvelous manner that would make you think of Comical icons and alike. The background of the game features a seemingly innocent city, but at the bottom you'll see hordes of weapons and even a Mafia man hiding and waiting to pull the trigger. The center is filled with the symbols relating to the game's theme from various melee weapons, different types of guns, dynamite, and 5 different characters from an Assassin, Charleston, Count, an Arabian Assassin and the Don of the Mafia. The game's control system may be a bit disappointing as you could only change your betting amount and not the 5-reel and 20-payline matrix of the game, but it eases up your experience by providing a pay table that will inform you everything you need to know about the symbols of the game. Aside from the symbols mentioned above, there's also the vault playing the role of the bonus icon, a man with a machine gun considered as the Scatter and a red car as the wild icon. Though it may not be the most lucrative in 888 Holding's line of games, its winning opportunities are still enough to be coveted by many.

Providing an older-school look than what the Comical art of Mafia Madness Slot Machine renders, the Mafia Boss developed by B3W is also a great game to satiate your cravings for a thrilling crime experience. It comes with a simpler setup of 5-reel and 9-payline matrix and a more intricate control system. It comes with a humbler visual setup with nice symbols to boot. However, the downside of this is its meager $500 jackpot, making it suitable only for short skirmishes.

If you want to become the Boss of the Mafia and win it big in the Mafia Madness Slot Machine, it is only wise to play it through the 888 Casino. We implore players to give this site a try as it provides a welcoming package consisting of 100% match-up to $200 and a $88 no deposits bonus. All of this is topped with other benefits you'd love to have.