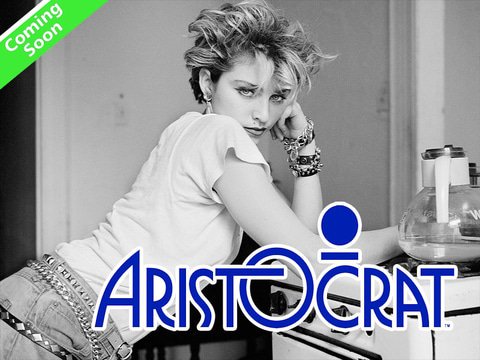 Feel like a virgin with Madonna on the side as we review the Madonna slot machine. A free demo game is available on this page with no download needed. Be the first to experience this stardom game and review how this famous celebrity can help players win huge prizes and rewards.

Aristocrat software has created this game and they gave everything they can to close this deal. Reports have stated this online slot machine is worth of $10 million deal. The Aristocrat has been persistent in getting the deal because the said gaming software is known for making games inspired by renowned personalities and characters such as Britney Spears, Downtown Abbey, and DC's Man of Steel. Thus, it is just so right to see Madonna under the games of Aristocrat.

Madonna Louise Ciccone, popularly known as Madonna, was a superstar singer who won several awards. In fact, this Grammy-winner has earned 57 chart hits. Most of her prominent songs have become famous in the 80s. Some of the well-known hits from her tracks are Material Girl, Like A Virgin, Crazy For You, and Papa Don't Preach.

The Madonna slot machine has internalized the glamorous personality of our superstar. The graphics and interface of the game is full of shining stars, representing the shimmering life of Madonna. There are five (5) colorful reels on the game. Players may bet on the 50 pay lines available on the screen.

Luxurious items of Madonna such as sunglasses and microphone are used as symbols on the game. Players will also encounter the luscious red lips and different faces of Madonna on the reels. In order to win the game, players must find three of more similar items on a single pay line. Each item has a corresponding amount of prize that players may check using the paytable of the game.

Our superstar is quite generous as she offers free spins for her fans. Players just need to get at least three bonus icons to get the 10 free spins. When bonus spins are triggered, a video of Madonna performing her famous songs will appear on the screen. This will surely entertain the players of this Madonna slot machine.

Celebrity on the Reels

NextGen Gaming also created a game inspired by a famous personality such as James Dean. James Dean slot machine has 5 reels and 25 pay lines. This popular actor has been the focus of the game and it can be a great machine to spin for the fans. It can be a nice option for those players who are looking for a manly game.

Slots Magic Casino offers Madonna free play slot. The game requires no registration so players can immediately indulge into it. Slots Magic is quite popular among players in Canada because of its bonus and free spins. Players who want to play the game on the road may do so as the Slots Magic is mobile friendly. Android phones, tablets, iPhones, or iPads can be used to access the said gaming site.