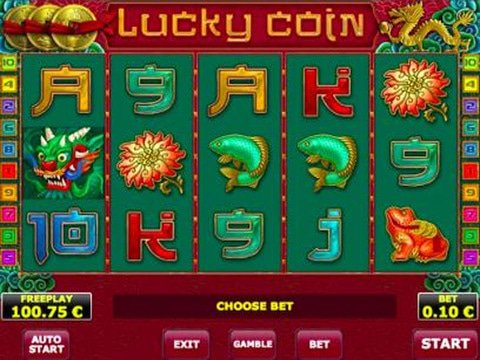 Despite of how common Orient-themed games has become in our modern times, this isn't enough to bar the ways of dedicated users to embark on a grand journey towards Ancient China filled with mythical and majestic creatures coupled with hidden treasures that's bound to bring excitement to anyone's life. Amatic Software has developed a game that will fit your alley entitled the Lucky Coin Slot Machine. Luck is a great part in Chinese Culture and you could exactly test that out in this game that's brimming with the Orient feel. Whether you're playing it for the experience, for the money or even for both, you'll surely have great fun playing it, especially if you test it out first through the Lucky coin free play slot demo. This demo version requires no download and no registration, allowing you to basically know it first before placing real dough on its slots.

Testing your luck with a Coin

If its name doesn't put up a fair impression that it belongs to the orient category, there's no doubt that it will more than make up for it the moment you enter its world that's filled with everything Chinese. From the elegant overall backdrop bathed in deep red color with a cloud pattern along with reels that's covered in jade green, you'll surely feel the Orient aura emanating from this game right off the bat. Though in entirety, it may not have the most overwhelming graphics, but its gameplay is more than enough to bring you to ecstatic heights. With a grand prize of 900,000 coins held by its dazzling and drop-dead gorgeous Geisha, you'll surely end up falling in love with Lucky Coin Slot Machine even more. It runs with a simple 5-reel and 10-payline structure with a simple control system that would allow you to manipulate the lines you'll bet on or even the amount of bet you're going to stake which could even go up to 500 coins per spin. If you get lucky and win, you could further increase your winnings by engaging on the gamble option for a double-or-nothing round. If you want to know more about the symbols, it also has a convenient pay table option where you'll see equivalent prizes for each symbols from the frog, koi carp, dragon, Azure Turtle, flower and more. The lucky coin in the game also acts as the scatter symbol for free spins while the Geisha is the wild symbol of the game.

Wherever you look at the industry, there will always be Orient games that would meet your path. Other than this Lucky Coin Slot Machine, there's also the Geisha Slot from the revered Aristocrat Software. It provides a spectacular view on the Eastern Culture, showing off grand and magnanimous sights of natures and of course, orient elements that makes up the entirety of the game. It runs on a 5-reel and 25-payline structure. Though it does not provide the most awe-inspiring jackpot prize, the fun it gives is unquestionable.

If you're planning to take Lucky Coin Slot Machine a lot more seriously, then we highly recommend that you give it a spin at Mars Casino. This establishment provides luscious welcoming promotion from 100% match-up to $400, 50 free spins along with utmost availability in the form of mobile and flash-play versions.