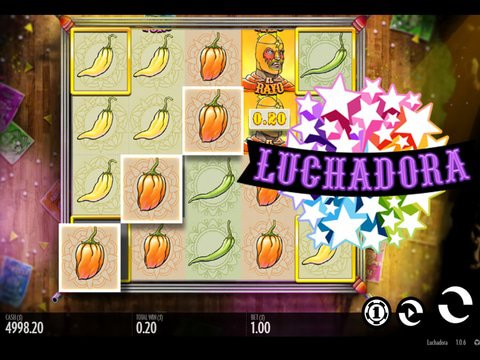 Step inside the four corners of a wrestling ring and prepare for a one-on-one battle with fortune in this new slot installment from Thunderkick software. Wrestling fans will definitely enjoy Luchadora slot machine, a Mexican wrestling based game which will reward you with slams of cash rewards and bonuses. Look out for lycra-wearing superstars as they will carry you in winning big on the reels. There are also other Mexican-based symbols on the screen which will reward you with various payout amounts. Start enduring the pain as it will surely lead to some gain in this free play slot available here with no download required.

This wrestling-based slot has five reels and 30 unique paylines for its online and mobile players. You can place wagers for as low as 0.01 coins up to 100 credits per spin. The medium to high variance gaming of Luchadora can rack you as much as 2,500 coins from your initial stake.

Since the slot is set in Mexico, you'll see symbols and characters on the reels themed after the said city. There are different types of chilies which reward you with various payout amounts. The green and yellow chilies grant you up to 200 and 250 coins respectively; whilst the orange and red peppers pay you as much as 300 and 350 credits respectively.

You'll also meet different wrestling superstars spinning on the screen. El Pantera rewards you up to 1,500 coins; whereas El Serpiente grants you as much as 1,750 credits. El Rayo pays you 2,000 coins; while El Tororewards you with a whopping 2,500 credit payout.

These masked warriors also transform into wild symbols. This is triggered when a wrestler icon lands on any of the four corners in the ring. All similar symbols of the corner wrestler will be transformed into these wild characters. These wild characters reward you as much 2,500 coins for a complete line of five symbols.

Luchadora slot machine presents you with rewarding bonus features on the reels. First is the Lucha Bonus Round which rewards you with free games. Look out for the Lucha Bonus championship belt icon to activate this bonus round. Land three, four, or five of this symbol anywhere on the reels and get rewarded with 7, 11, or 15 free games respectively.

The wrestling wild feature is also triggered during these bonus spins. Transform all wrestling superstars into wilds and replace the Underdog icon into a La Luchadora character represented by an ultimate wrestler who rewards you as much as 2,500 coins.

There is also a Lucha Smackdown symbol which may grant you extra free spins and huge multiplier bonuses.

More Ring Action on the Reels

RTG's Lucha Libre slot machine is another Mexican wrestling themed slot which will dominate your gaming screens. Enjoy real time ring action with masked wrestlers, corn chips, beer and tequila bottles, chilies, and the golden trophy spinning on all its five reels. You can place wagers in all of its 25 paylines to increase your chances on winning the jackpot at stake worth 5,000 credits.

You can now try Luchadora's demo version gameplay at Slots Million Casino with no registration requirement. All players from Canada are also encouraged to participate here to get exclusive no deposit and free spin bonuses.