Lost City of Incas
Enjoyed playing this game?
Rate it → 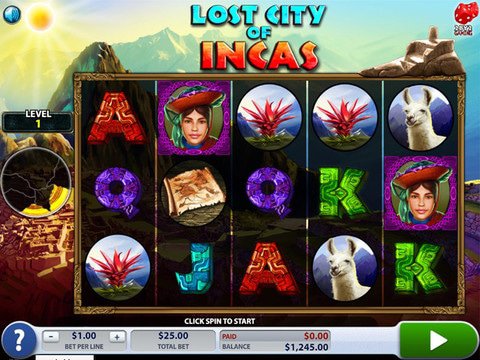 Discover the hidden mysteries of Incas in this new slot game developed by 2 By 2 software. In Lost City of Incas slot machine, you travel back in time to explore the vast lands of the Aztecs to unravel lost treasures and valuables from Incas. Get to unearth golden amulets, treasure chests, and ancient riches as you spin the reels on this free play slot game which is now available on this site with no download required.

This five reel slot has 25 unique paylines for its online and mobile players to wager on. You can place wagers for as low as 0.25 coins up to 100 credits.

To get most of the hidden wealth from Incas, you must first land several character combinations on the reels. These include combinations of the classic card characters which pay you from 0.50 up to 8 credits. An image of the wild flower rewards you with up to 10 credits; whereas the city map and the mountain goat give you a max payout worth 12 coins. The treasure chest symbol pays you with 16 credits for a complete line of five in a line.

The icon of the beautiful lad rewards 25 coins; whereas the highest combination belongs to the emperor himself which grants you with 80 coins.

The wild symbol is represented by the Lost City of Incas logo which only appears on reels 2, 3, 4, and 5. This replaces all characters on the screen - except for the scatters - to complete a winning line. The sun character is the game's scatter symbol. Get to win instant cash rewards from 5 up to 25 credits when you land 3 up to 5 of the scatter on the screen.

Aside from these instant payouts, there is also a special in-game feature in Lost City of Incas slot machine which is triggered with the scatter character. Three or more of the scatter activates the Temple of the Sun bonus feature.

You can use these acquired spins on your free game round. During these free spins, only high paying symbols are present on the reels. All characters revealed with the mystery stacks are converted into gold symbols which may reward you up to 40,000 credits.

If you are find of digging treasures, then you can also try RTG's Secret Symbol slot machine. Secret Symbol is a five reel, treasure hunting game, which has 25 paylines for its players. Travel back the old Aztec civilization on this featured slot and win up to 50,000 times of your stake played.

You may now try the demo version of Lost City of Incas in Slots Million Casino with no registration requirement. All Canadian players are also welcomed to participate to get exclusive no deposit and free spin bonuses.