Lord of the Ocean

Lord of the Ocean
Enjoyed playing this game?
Rate it → 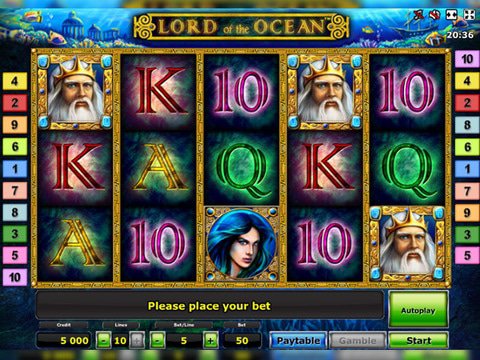 Lord of the Ocean

Lord of the Ocean Game Review

Mythology-based slot games have been gaining prominence nowadays due to its interesting storylines and high definition gaming graphics which involved distinct features of Greek mythology characters and settings. Thus, another video slot machine is making its mark on the gaming industry which focuses on the God of the Ocean, Poseidon. In Lord of the Ocean slot machine, you are again transported back to the periods of the known Greek gods and goddesses of the ocean and take part on the reel gaming to win impressive rewards and bonuses. Start diving in and win these exciting prizes in this free play slot which you can now try on this site with no download required.

Lord of the Ocean Game Review

This five-reel game developed by Novomatic software has 10 unique paylines for its online and mobile players. You may place wagers for as low as 0.04 credits up to 1 credit - which is equivalent to a maximum stake of 10 coins - per credit line. Play with the max wager and you might have the chance on landing big on the reels with the jackpot amounting up to 5,000 credits, which is equivalent to $50,000 cash.

Just like any other slot games, you must be familiar with the given characters and symbols on the reels. Lord of the Ocean slot machine has distinct reel characters like the ocean warrior, chests, the goddess, amulets, and Poseidon himself. It also has the classic card numbers and letters which pay the lowest payouts for successful combinations on a line.

The card numbers and letters pay winnings from 5 credits up to 150 coins. Meanwhile, the combination of the ocean warriors or the chests rewards you up to 750 credits; whereas the goddess character grants a 2,000 max credit payout. All these equivalent payouts increase when you place higher wagers on the winning paylines.

Poseidon, the god of the ocean, acts as the game's wild symbol. Just like any wilds, this replaces characters on the reels - except for the scatters - to complete a winning combination. You will instantly win 5,000 credits if you by chance land five Poseidon characters on an active line.

On the other hand, the amulet represents the slot's scatter. When three or more scatters appear on the reels, you will be rewarded with 10 bonus spins which you may use on the free games. This bonus feature may be reactivated during these free spins. During these free spins, special symbols will also appear on the screen and act as special wilds. These wilds will expand on the reels for more chances on landing combinations.

The scatters also reward you with an instant prize. Just line up five of these amulet symbols in one active payline and win 200 instant credits.

Other Mythology Based Games

If you are fond of other similar themed games, then you might want to try 1x2 Gaming's Gods of Olympus slot machine. Gods of Olympus has five reels and 20 active paylines for its players. It boasts its bonus round features and free spins which might reward you with huge winnings.

You may now try Lord of the Ocean's demo version in Cashpot Casino with no registration requirement. Canadian players are also welcomed to try this game with real money wagers to get free spins and no deposit bonuses.