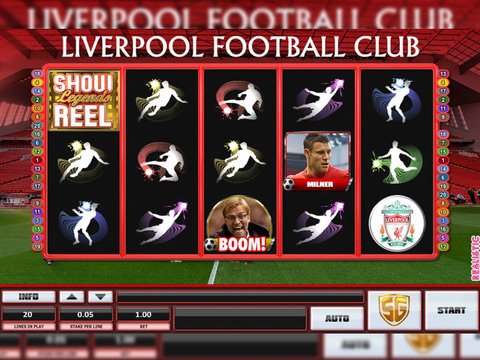 Slot games about sports aren't really that rare especially with the fact that sports have always been a category well-exploited by the gambling industry. Attention of the gambling industry is even stronger when it comes to the major sports throughout the globe like Football and although there are many football-themed game slots out there, there's still no shred of doubt that the game developed by Realistic Games Software is one that would catch you by surprise. Well, surprise may be an overstatement especially if you have already seen their 'Chelsea' Football Slot as the Liverpool FC Slot Machine is one that's focused on the Liverpool Team. It may not seem that special at first especially if you already have tried and tested diverse slots in your career but for a true fan of the game, this game is truly precious. The Liverpool FC free play slot demo in this page requires no download and no registration so you can try it right away.

To become better at Football requires varieties of moves, support from team and coach and of course, perseverance and skill of one's self. However, when translated to gambling, none of those would matter as luck, management and tactics would still prevail. Going back to the game itself, it truly portrays the scene of a football colosseum with the trimmed grass that's impeccably provided, the robust structures and the countless red seats. In this 5-reel and 20-payline game, there's a control system at the bottom that would allow you to easily navigate through the betting range of the game. From the controls, you can change the coin denomination and the number of lines you'd want to bet in. Looking into the robust and vivid reels at the center, comes the 5x3 layout of the reels, which will accompany you throughout your time playing the game. There are different positions of playing football in the game which serves symbols of the game and aside from then, you'll see the realistic symbols of the key characters from Liverpool FC itself. You'll see iconic characters like Adam Lallana, James Milner and more. Looking closer into what this game has to offer, two key features comes out to the front; the Super game and the Bonus game. The Super game is but a click away from you just to raise the risks and tension, fit for high rollers. The Bonus game is triggered by the Scatter symbol of the game which is the Show Reel Symbol, which will allow you to enter the Liverpool FC Slot Machine bonus game.

Other than Liverpool FC Slot Machine, there's also the Football Slot from Endorphina, which goes to show the popularity of this game. It runs with a 5-reel and 21-payline matrix with cartoonish art to make the game look fun and colorful, topped with utilizing varieties of special features to help you achieve its jackpot.

With only a few choices of casino under the software, we suggest that you go for Bet365 Casino. Reputation-wise, it is unparalleled in the industry with its experience and operation that has already exceeded a decade. It comes with lucrative promotions to boot, whilst also exhibiting varieties of other lucrative features such as great customer service, banking options and way more than you've expected.