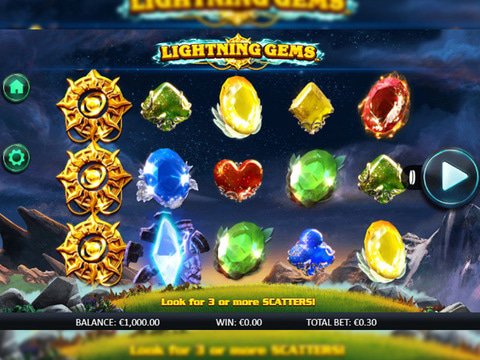 From Sapphires, to Rubies and Diamonds - gems have always been untouchable concepts for some as they are more precious than what one may think. Its novelty can even be like gold and with such pristine reputation, it isn't surprising that an outstanding brand like Nextgen Gaming has evolved it into something that can easily be used by any people, all within the comfort of one's own abode - the Lightning Gems Slot Machine. It has even incorporated varieties of fun element to make the game far more intriguing and invigorating than any other games you'll find in the market with the same theme. If you think however, that this isn't enough to convince you, there's still the option of playing it hands-on for free with the Lightning Gems free play slot demo, along with the review about its details below. The demo also comes with no registration and no download needed, allowing you to explore its beauties right off the bat.

Unbelievable - there's no doubt that many would have a jaw-dropping reaction to what this game offers. The minute you walk in its dimension, you'll be bewildered by its staggering sound effects and its superb graphics that's truly beyond the norm. It isn't an overstatement to say that Nextgen Gaming has truly upped their game in this stellar slot. Of course, for the convenient of some, you can also play with no sound and manage the settings and controls with ease through its intuitive navigation buttons. The game comes with a 10-payline structure with a max bet setting of up to €150 per spin.

The background of the game is nothing short of stellar as well. You'll see majestic forms of mountain towering in a grassy and lush plain, topped with the view of the milky way galaxy hanging above its heavens - making the game look more ethereal, ephemeral and otherworldly. At the center lies the myriad symbols of the game that are undeniable spectacles to one's eyes. You'll see two varieties of sapphire, emerald, topaz and ruby - one smaller and one that's bigger and more magical. The other two symbols are more stunning than the others - with one being a golden sun medallion and the other that's like a gem from another world. The golden gem is the wild symbol of the game that can offer its help to you in completing winning combinations and on the other hand, the lightning gem is the scatter of the game which can even award you with the free spins of the game. There's also the Wild nudge and Wild Wins feature, that ought to make the game more rewarding.

When it comes to gem, Starburst Slot is something that can truly match up to Lightning Gems Slot Machine. It is from Net Entertainment, and it will take you to space for yet another unique gem mining experience. You'll have a 5-reel and 10-payline matrix to enjoy with this game, topped with an easy-to-win 2500 coin jackpot prize.

There's no better place to play the game other than one of our suggested site, the Slots Million Casino. Deemed as a haven for slot gamers, you'll have plenty of bonuses from 100% match-up to 100 free spins promotions to play with, along with other more regular bonuses.