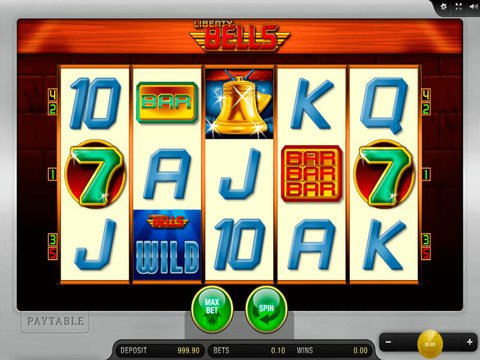 From a battle of who can provide the biggest temptation in each spin, the slot industry has entered the generation where many of its products are rated and reviewed based on varieties of its characteristics. One must be straightforward, innovative and aesthetically compelling to make sure that it keeps the attention of the users, all while ensuring that it comes with seamless operation that will allow players to get into action right away. Liberty bells Slot Machine from Merkur Gaming has taken off to try and appeal to the massive amount of potential players throughout the globe. Does it have what it takes to fare well in the market like other products from the brand? Whether you're a Canadian gambler or not, feel free to test out the game's capabilities with no registration, no download and no risks involved, through the Liberty bells free play slot demo.

The main theme of the game may not be all that clear when you stepped into its dimension but, one thing that's for sure is the prime character of the game which is the Liberty Bell. Liberty Bell Slot machine comes with a more classic and generic look but, without forgetting to make sure that it provides them with a clear, vivid and robust graphics and setup. The background of the game is a sturdy wall of bricks with a title and slots that will literally make you feel like you're back in the olden days. The game has a cool 5-column and 5-payline reels that may not be the most cutting edge and comprehensive reels but, will still pack quite a punch in terms of its rewarding capabilities. The pay lines are fixed but, you can change the betting range up to 20 coins per spin. It isn't that mesmerizing to play if you're in it for more prizes when you're a high-roller but, it will surely suffice in providing sweet fun and decent payouts. A lot of card symbols can be seen on its sturdy reels while classic symbols can also be spotted such as a bar, double bar and triple bar along with a star, lucky seven, the liberty bell itself and the title of the game. The liberty bell is a whopping scatter symbol with a staggering capability that may just award you with 15 free games to boot. The Title Wild symbol can help you achieve more chances of winning with its substituting capability while it can also reward you with a double win. This wild further boosts its reputation in the game with a 10000-coin payout which is the highest payout in the game.

The awesome liberty bell isn't only featured in the Liberty Bell Slot Machine of the Merkur Gaming as B3W also has one of the same title which you can try. It's built with a 5-column and 9-payline reel setup a steam-punk setup that also airs the vibe of a classic, topped with comprehensive controls, classic symbols and mind-boggling rewards up for grabs for its players.

Get to play the game at Lvbet Casino and experience its action at the finest environment. Revel on 200 free spins, astounding number of match-up deposit promotions, LV wheel exclusive feature and way more than you can imagine.