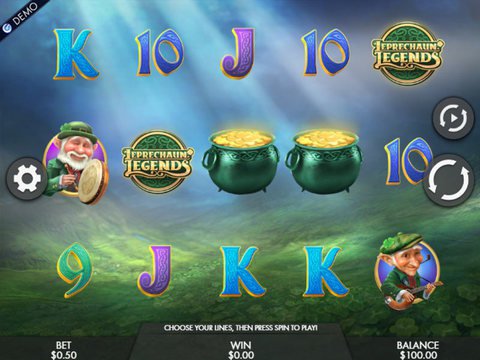 Leprechauns are Irish folklore creatures characterized by a green dressed bearded old midgets wearing buckled shoes and a pointed hat. Conventional myth considers them to have a pot of gold found at the end of a rainbow. Genesis Gaming created a slot machine game that is literally all about luck and features the legendary creature as someone who blesses players with tons of amazing prizes. Enjoy a no download no registration required free demo of the slot here Genesis.

Go straight into the Irish lands with Leprechaun Legend's stunning graphics and carefully composed Irish soundtrack. The game is one of the best slot machine games from Genesis Gaming and one with the biggest prizes. It takes you right into an amazing world of Irish folklore with breathtaking and vivid visuals.

Set in heart of an Irish countryside, the game offers every player a real taste of Ireland with its lifelike valleys and characters that pop out of the reel. The game runs smoothly on any device including the mobile version which also has a free demo. The jaw dropping graphics is what makes the game inviting to game enthusiasts. It makes every player feel like they are deep in the forest looking for the leprechaun's hidden pot of gold.

The game symbols are those of traditional card game with symbols from 9 to ace with colors and font style reminiscent of the Irish style. There are also other symbols including 4 leprechauns that are visually compelling, a golden clover, and a pot of gold that makes the game really authentic. Spinning the wheel gives every player a stimulating variety of songs that can both be capturing and motivating.

Leprechaun's Legend is a 50-payline game increasing your chances of winning with every spin. This gorgeously designed game has the golden clover as a wild symbol and the games logo is the scatter. Getting a combination of symbols with 3, 4, or 5 of them will reward you with a respective amount of $1, $5, and $25.

Free spin can be obtained by landing 2 or more scatter symbols on the reel which triggers what is called the Luck O' the Irish otherwise known as a free spin. Landing 3 or more scatters will give you additional free spins which are a bonus called the Legendary Song feature. Landing a specific leprechaun on their associated reel will also turn wild locking them in place the entire free spins.

Leprechaun Hills, developed by Quickspin has a similar Irish theme revolving around the life the creatures. They both have a stunning and visually compelling graphics that will surely leave every player coming.

For Canadians who would like to have a taste of this Irish-themed games, visiting Slots Million Casino gives you a big opportunity of enjoying the game and winning tons of great prizes. They offer huge signup bonuses and free spins for players who create an account and enjoy a game.