Leprechaun Goes to Hell
Enjoyed playing this game?
Rate it → 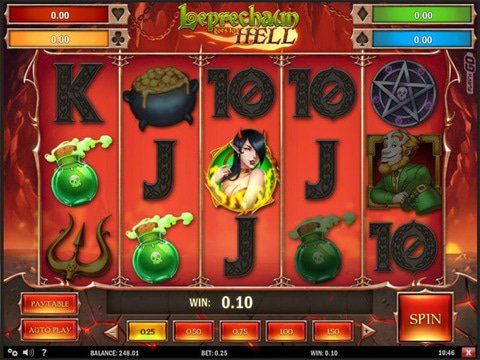 Leprechauns are no stranger to the gambling industry. In fact, the Emerald Isle or the Irish theme has becomes an incredibly gargantuan category in the industry with the amount of developers contributing to its content every single year. However, such a progress really isn't shocking as it only piles up more choices for players. In regards to this, there's no doubt that when choosing an Irish-themed game, you ought to pick something that's unique even when compared to its own peers. Play'N Go breaks the chain of a seemingly balanced Irish-theme category as it broke away from the conventional in a rather intriguing title - the Leprechaun Goes to Hell Slot Machine. The name itself already gives you the idea of what its about but, what did this leprechaun do to deserve such an outcome? Look into what this game has to offer with the no registration and no download Leprechaun Goes to Hell free play slot demo.

The Fiery Depths with a Green Tinge

Just imagine; across the barren land and scorching heat, comes a green-dressed man with a fancy beard, holding his pot of gold coins as he confidently strolls through Hell. Such a scene is beyond belief but in fact, something that's within your reach - through the Leprechaun Goes to Hell Slot Machine. This game has truly broken the monotony in the Leprechaun category but, it is by no means a forceful step for the sake of just breaking the conventional. This game is a carefully, well-developed game that's crafted with high details and impeccable understanding of the concept. The fiery depths of hell are portrayed terrifyingly while burning flames can even be seen animated in the background. The game's background audio is also rocking wild, making it evident of just how thrilling the game's nature is. The control system of the game is pretty neat and makes it easier to navigate through the game, while there's even a pay table button to help you get accustomed to the game easier. There are different symbols in the game from green potion, a demonic trident, pentagram symbols, devilish hat and the Leprechaun. The appearance of Evelyn, sultry demon, in the slots, makes it apparent that the reason the Leprechaun is there, is due to the demoness. In fact, if you get Evelyn the demoness in a three-reel combination, you can activate the game's stunning bonus feature which may just be the key for you to get endless glory and of course, wealth from this game.

Although The Leprechaun Goes to Hell Slot Machine is truly a game worthy of admiration. Not everyone would appreciate it. If you want only a regular leprechaun game, the Lucky Leprechaun from iSoftbet ought to do just fine. It features a 5-reel and 30-payline matrix while displaying astounding graphics with a bit 3D-like appearance, vivid colors and incomparable degree of crispness. It utilizes different special symbols and features as well, to help you enjoy the game more.

Feel the exciting nature of hell while you accompany the star of the Leprechaun Goes to Hell Slot Machine, in the site, Slots Million Casino. Revel on the best which the reels can offer you, with the endless ongoing promotions of this casino, a stunning 100% match-up deposit bonus, VIP Program and even Loyalty Programs to boot.