Legends of Africa
Enjoyed playing this game?
Rate it → 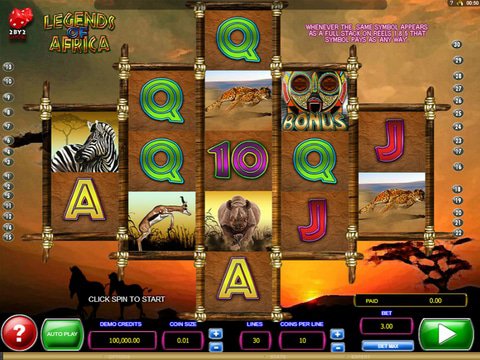 Who wouldn't love to visit the African Outback and bask on the glorious scene of the sun as it illuminates the world and shows the beauty and the outstanding array of life which walks on it? 2x2 Gaming, one of the most powerful software developers nowadays, has developed one of the most majestic African-themed game that's bound to shake your deepest core - the Legends of Africa Slot Machine. Its name alone is bound to make some impact on you and you do not have to worry because more than just a flashy name, it offers way more than what you think. Explore this foreign land all in a virtual trip that would surely imprint itself on your memories. Play with no risk and discover the infinite amount of benefits laden in this land, through the no download and no registration Legends of Africa free play slot demo which you can find exactly in this page.

Revel on the scene that's mostly portrayed in movies when Africa is spoken, as soon as you enter the dimension of the Legends of Africa Slot Machine. The silhouette of the land stands imposing as ever while the sunset gloriously makes its way down from whence it came from - there's no doubt that you'll surely stand in awe in the presence of such a designing feat. However, this can only be expected from an exemplary developer such as 2x2 Gaming. Not only is its display incredibly vivid and engaging - the game also comes with a unique reels in a vastly different layout. Directly below the reels with 30 pay lines, is a comprehensive control system to help you utilize the game's capabilities along the way. The game's pay lines are fixed and as such, you can only manipulate the denomination and coins per line and from there, you can bet up to a whopping 120 coins per line which is bound to bring you great chances of winning massive jackpots. Looking back into the reels of this African game, you'll see card icons, a wide array of animals from a deer, zebra, cheetah, rhinoceros, the majestic Lion and a beautiful native of the land. Of course, there's also the picturesque landscape portrayed in the game's Wild symbol, which will improve you winning chances by leaps and bounds through its capability as a wild symbol. Of course, the game comes with other cool features that'll surely mean endless benefits on your side, which includes a staggering free spins feature which is pretty much self-explanatory, a Mystery feature and a Blast Feature that'll trigger an Anyway Pay when full stacks of same symbol shows itself on the 1st and last reels.

Legends of Africa Slot Machine isn't the only game which portrayed the beauty of this land's outback. There's also the Archibald Africa from World Match with a 5-reel and 50-payline gameplay which shows the beauty of Africa in the eyes of an explorer, offering a staggering 1500x jackpot.

We recommend you to play the game at Slots Million Casino and experience the best which the game has to offer. Boost your gaming experience with the wide array of bonuses awaiting you in this page and revel on its marvelous software, banking methods and award-winning customer support to help you along the way.