Legend of the Pharaohs

Legend of the Pharaohs
Enjoyed playing this game?
Rate it → 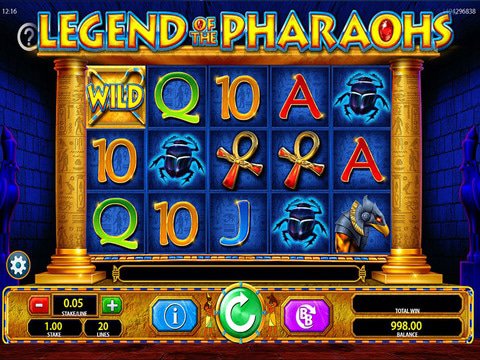 Legend of the Pharaohs

Legend of the Pharaohs Game Review

Travel back deep into ancient pyramids and know more of their interesting Egyptian culture in this new slot game installment from Barcrest software. In Legend of Pharaohs slot machine, you'll be transported back into the historic era of Egypt where pharaohs, pyramids, and ancient artifacts rule the city and the reels. Look out for themed symbols like a scarab beetle, the eye of Ra, ankhs, and a sacred relic which will reward you with various payouts. Get marveled with a picturesque of the pyramid on the screen as it will grant you the maximum jackpot available. Start packing your bags now and let's have a trip back in this free play slot on this site with no download required.

This ancient Egypt themed slot has five reels and 20 unique paylines for its online and mobile players to wager on. You can place stakes for as low as 0.01 credits up to 0.25 coins per spin. This allows you to spin the reels with a maximum wager worth 500 credits.

Since you're travelling to Egypt through the reels, you'll be seeing symbols themed after the Egyptian culture. There are images of a scarab and a modernized eagle head which reward you as much as 40 coins and 60 credits respectively. You can also see the ancient Eye of Horus which rewards you 80 credits at most; whilst the valuable key of Nile grants you up to 100 coins.

The slot's logo title pays you the highest payout available worth 200 coins for a complete line of this character.

You should also watch out for the wild symbol, represented by two canes, on the screen. It substitutes to any character on the reels - except for the special pyramid symbols - to complete a winning line. It also pays you with 20 credits for having three of this symbol in an active line.

Towering Rewards from the Pyramid

The pyramids play a vital role on the reels of Legend of Pharaoh slot machine. The blue pyramid icon, which is considered as the scatter symbol on the screen, rewards you with bonus free spins. When you land 3, 4, or 5 of this symbol anywhere on the reels, you will be rewarded with 1, 2, or 3 active bonuses respectively plus 10 free games for all.

Other Treasures from the Pharaoh

You can also try IGT's Pharoah's Fortune slot machine to find other riches deep in Egyptian pyramids and ancient Pharaohs are found. Pharaoh's Fortune has five reels which have different symbols such as scarabs, pyramids, Egyptian writings and drawings with various payout equivalents. You can also find an icon of the Green Pharaoh who activates a series of free spins which can win you bonus multipliers for bigger wins.

Legend of Pharaoh's demo version gameplay is now available at Drueck Glueck Casino with no registration requirement. You can now play this version, together with Canadian players here, to win exclusive free spins and no deposit bonuses from the site.