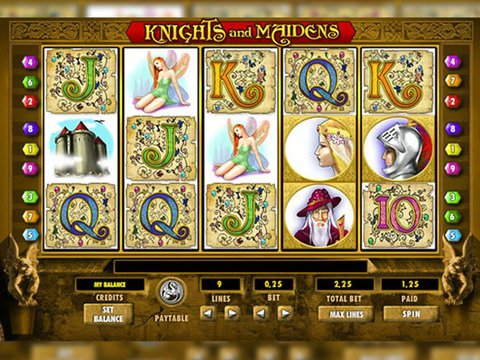 Cliché themes may not be the most intriguing prospect for many wagers out there, but trust us, you'll see a lot more of those during your stay within the web-based waging industry. What makes it incredible is that even this cliché themes that are already overused, could still provide superior experience but only a few could do that. The Knights and Maidens Slot Machine is a medieval themed game with a setup that you would have certainly heard of already - a damsel in distress waiting to be saved by a valiant knight. However, with such a cliché story, this game developed by 888 Holdings has become one of the topnotch games in the industry today that have even dazzled Mainstream players from Canada, America and more. If you're intrigued enough, visit the world of this game through the Knights and Maidens free play slot demo. No download and no registration is needed to conquer this free play version of the game so jump into the fray right away.

The Valiant Knight and the Damsel

Setting aside its cliché and rather non-intriguing story, there's a lot more than meets the eye to this game than you think. The game comes with a vibe that makes it feel as though it came from the olden times, packed with simple backdrop and controls. Simplicity makes it easy to play the game with no complex things to do, but the reels at the center along with the symbols will prove to you just how amazing the game is. The Knights and Maiden Slot Machine does not focus on this main characters alone. It also provides unique, high-quality and compelling symbols of some of the characters from the medieval and fantasy realm. You'll see a Hunchback druid, Fairies, Merlin, a Maiden and more. There are also common card icons that may not be eye-catching, but would still provide plenty of chances to win small bits of money in every spin. Merlin the Wizard holds the role of the Wild, possessing a magical substituting capability that's commonly known from Wilds of games. There's also the Knight, treated as the scatter of the game that's equipped with power to award free spins. Aside from this, there's also a bonus symbol that could trigger the Legendary Quest Game, awaiting your arrival to win bigger prizes.

For some, the medieval period may be as colorful and glorious as the Knights and Maiden Slot Machine, but there are some games out there that takes it for its tragic qualities. The Forsaken Kingdom is one such game, developed by Rabcat, which strays from the norm as it features quite a devastating atmosphere for a medieval game. It boasts a 5-reel and 20-payline structure with a jackpot prize of up to $40,000. Its graphics are impeccable and though gloomy, it is a place where you could surely rise to the top.

Witness and play the game of Knights and Maiden at one of our suggested casinos to play games, the 888 Casino. This prestigious brand is unquestionably one of the best as it lays down an intuitive system built with stellar security, banking options and more. You'll also be able to revel on tons of regularly updated bonuses, while also welcomed with lucrative $88 no deposits bonus and a dollar-for-dollar match-up deposit bonus.